Just a quick post and a few photos from last nights RaspberryJam in Bristol – held in the most excellent Bristol and Bath Science Park.

Alan (@teknoteacher) the driving force behind the RaspberryJams, was on-form as usual, keeping everything flowing nicely with his usual jokes, and while I didn’t count the people, there seemed to be well over 100 attending! There was a nice time to do some networking before the main event (spread the jam as Alan says!), then the talks then a big break-out session afterwards with people showing off what they’re doing with their Pi’s and so on.

I did a one of the talks, and while it wasn’t quite fully what I’d planned, due to some technical hitches before-hand with Keith Dunlops presentation – all about RiscOS on the Pi…

(The Pi is a bit of a fussy little beast which won’t normally output to HDMI when it doesn’t detect a “live” HDMI display connected to it, so when you connect a Pi into a fancy multi-switching input thingy, unless the switch is set to take the HDMI input, then the Pi won’t boot up in HDMI mode!)

However after that delay, as Keith often ends his talk with BBC BASIC running under RiscOS on the Pi, I cut my talk a little short and spoke more about my BASIC than what I’d fully planned to speak about – however the essence of what I was going to saw was that programming (or Software engineering!) isn’t just about glitzy/glamorous web “apps” with shiny graphics and fancy buttons… Programming also encompasses a lot more – which some people think is boring, but others (like me) find much more exciting – and that’s the world of computer control.

I also think of myself as a Programmer or Software Engineer. I’m not a developer – I’ll leave that term for the airy fairy web people 😉

So, someone, somewhere has to write the code that drives the braking system on your car, the engine management and so on. Someone has to write the low-level software for your hand held GPS, your microwave, your washing machine, etc. Someone (or probably some team!) wrote the software for the Mars Curiosity robot – now there’s a project you can’t afford to get wrong!

And if you’re wondering who wrote the software for some of these things, and thinking it’s some underpaid chap in India or China, then think again – Heber who hosted the RaspberryJam last night is based in the UK, manufacture their own control boards (in the UK!) and write software for things as diverse as vending machines to the Dyson Washing machine!

Here’s a few photos from the evening: 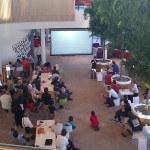 View from the Gallery 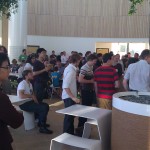 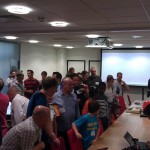 View of the Demo Room 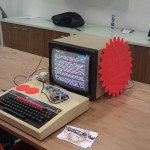 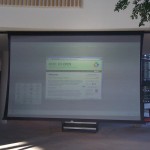 Links to other peoples photos, etc.: