On the evening of Saturday the 24th of November, 2012 the lower part of Buckfastleigh flooded. Both the Mardle river and Dean burns were full to overflowing – with some rather serious consequences. I originally took a few dozen photos and dumped them here, but I’ve now had time to sort them and take a few photos of the morning after – when the river levels had returned to almost their normal winter levels.

Fortunately the rivers do drain rather well here, however a period of constant and heavy rain (lasting weeks) had essentially filled up Dartmoor which normally acts as a big sponge – and the water had no-where to do but to fill up the rivers.

In Buckfastleigh, Station road was the worst hit, but the shop at the bottom of Fore Street (“Curios”, known to some as “Trevors” DIY although he moved out some years back), the Valiant Soldier and a few houses on Fore Street which backed onto the Mardle were also affected.

Our garden backs onto the Dean Burn and the water was up to the top of the steps we have which lead down into the burn. That’s about 2 meters higher than normal.

If you want to see the original snaps I put up here, please go to: http://unicorn.drogon.net/buckfastleighFlood/ and do get in-touch if you need/want lager ones for insurance, etc. purposes.

This is what I first photographed: 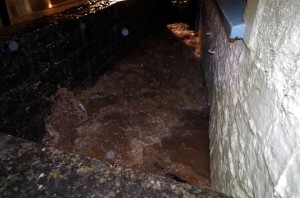 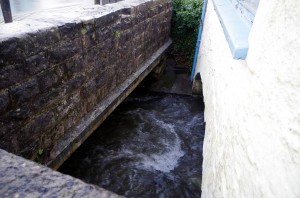 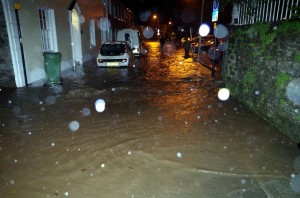 This is looking along Station Road. The water ended up a little higher before it started to receded, but the cars are under enough water to cause problems with their carpets, electricals, etc. and the houses to the left all had water running through them. 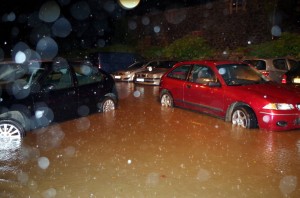 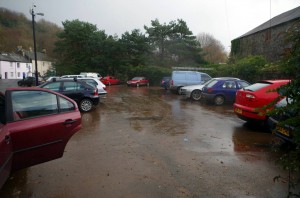 This is Station Road Car Park. Cars up to their axles at this end, it’s a little lower and so a little deeper at the other end. The bottom photo is the morning after – mud and lots of unhappy people. 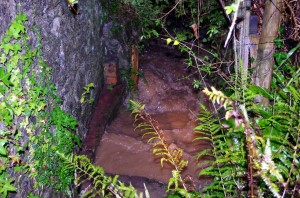 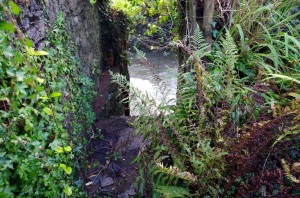 A little hard to tell what that is, but it’s the steps at the bottom of my garden that lead down into the Dean Burn. Normally you can walk down them and stand by the side of the burn, but on that night the water was right up to the top and starting to creep down the path. That’s about a 2m rise. 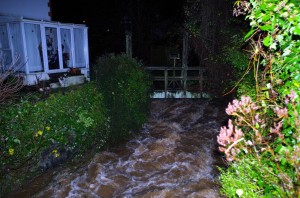 This is the Dean Burn at the bottom of my garden. In the top photo, it’s almost coming over that wooden bridge (it was splashing over it at one point). Normally it’s just a little stream and we see the river bed, even in winter – unless it’s been raining. That bridge is a good 2m above the water level. 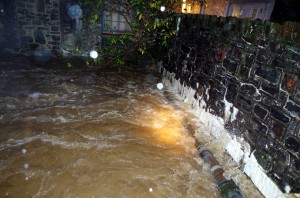 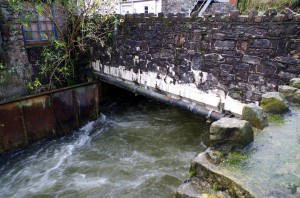 This is the bridge over the Mardle at the bottom of the lane off Fore Street that leads into Dial Court, or the old foundry. The Mardle didn’t drop as quickly as the Dean – there’s still another metre of water to go until it gets to normal levels there. 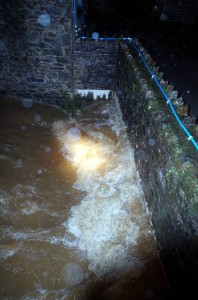 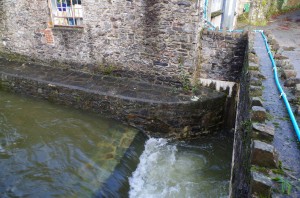 This is the other side (upstream) of that bridge. There were some local concerns about the stability of the walls on the building opposite – fortunately they held! 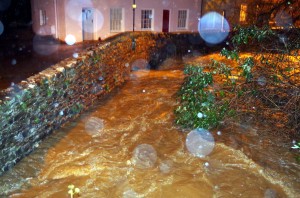 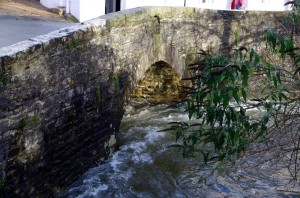 This is the bridge over the Mardle on Station Road. I’m standing on the wooden bridge that goes over the Dean Burn from the car park into the Millennium Green here. In summer we hold an annual “duck race” and walk under that bridge without bending over… This is where the Mardle and Dean joins. The water downstream of here was “big” and almost all the green was flooded. 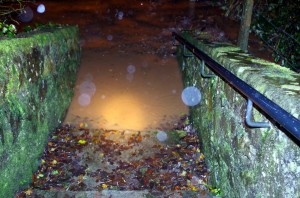 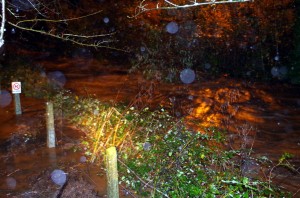 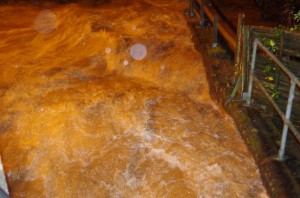 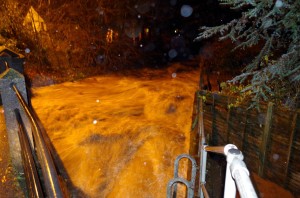 These two shots are over the Dart Bridge Road and show the Mardle (+Dean) up to the level of the wall (and it was over the wall just a few meters downstream of here and flooding into a garden). The steps you can just see the top of in the bottom photo lead down to a grating which is the overflow tunnel for the Dean Burn – there’s at least 2-3 metres more water height here than normal.

The townspeople have been remarkably resilient and for most things are getting back to normal now – although it’s been sad to see peoples possessions out on the street in the past week, waterlogged and ruined. David Cameron PM visited the town on Tuesday too and we had some news coverage – good for the town, lets just hope all the insurance companies quotes and promises, etc. are kept!