Some years ago, I bought a Big Trak off ebay with a view to making it work – although it was sold as “working”, the seller was slightly creative with the truth, but since the price was right (a fiver) I wasn’t going to complain too much…

So fast forward a few years and we now have the Raspberry Pi and as I’ve been doing a lot of work with it’s on-board GPIO, I thought it would make an idea project for the Pi, so these pages are going to document my efforts to make my old Big Trak toy tank work with a Raspberry Pi.

If you’re not familiar with the Big Trak, it’s a programmable 6 wheeled tank-like toy that was popular in the early 1980’s. It featured a keyboard for data entry, a “Photon Canon” (a bulb and a blue filter), and a speaker for making various noises with. Using the keypad you could program up to 16 steps in it – which included moving forwards, backwards or turning (using minutes on a clock face as the angle). 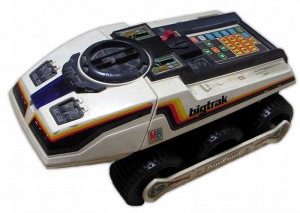 The above image from the Wikipedia Article 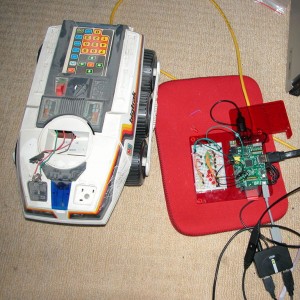 My Big Trak next to a Raspberry Pi

Watch this space, as they say…

It turns out this Big Trak I bought off eBay a few years ago has been somewhat tampered with – it’s been taken apart by someone else and sadly not put together in too sympathetic manner – with some critical bits missing – the mechanicals for the wheel drive being the main bits missing, so until I can source another, or make some repairs, this is on-hold, however… Do check the blog for a Plan B – Pi Lego Trak!