Frustrated by the fact there there is only one easily accessible PWM output on your Raspberry Pi? Then this article is for you, because now you can use ANY GPIO pin as a PWM output thanks to the latest addition to wiringPi…

The latest addition is a software driven PWM generator that runs as a thread in the background of your program managing the outputs of the pins in a PWM manner. It can be used to control any number of pins on your Pi – from 1 to all 17 if desired.

The down-side? Well, like my 7-Segment LED driver, it’s not perfect. Even though it runs at a high priority using a real-time scheduler inside Linux, it’s still prone to being temporarily descheduled for a fraction of a second, however for  driving LEDs and motors, it should be fine. The other overhead since it’s software driven is CPU cycles – and in the default configuration with a base PWM frequency of 100Hz, then the overhead is about 0.5% per pin. It’s not really practical to increase the base frequency without CPU usage going through the roof, or the resolution (range) going through the floor. The minimum pulse-width is 100μS due to Linux timing issues – combine that with a range of “100” and you get a frequency of 100Hz. (See the code for more details). 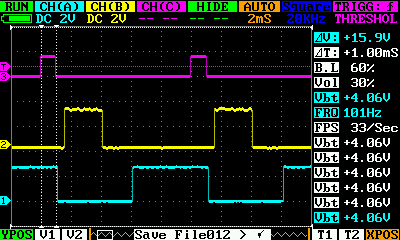 The ‘scope trace above shows… The Purple trace is the one it’s triggering one and that represents an output value of 10 – the vertical markers and the ΔT measurement shows 1mS which is right – 10 x 100μS pulses. If you count the dotted squares, there are 5 between the leading edges of the rising edge in the Purple trace which at 2mS per division is 10mS giving a PWM frequency of 100Hz.

Each PWM signal is generated by a separate thread so they all run independantly of each other. The traces are surprisingly steady though.

Finally, one of my infamous videos: