I had a few hours to spare today while I’m in Cambridge, so I decided to pay a visit to the Center for Computing History and what an exciting place it is! (Well, for an old geek like me that is!)

The Center for Computing history is a museum and charity, supported by your donations, so if you’re in Cambridge do pay it a visit if you can – it’s chock-full of … well … “stuff”. More Stuff, and even more stuff! (and behind the stuff – yes, you guessed it, even more stuff!)

When you think of museums, you think of places with stuffy old exhibits, but computing … well, it’s not that old, really. Sure, we have examples of computing devices or ideas centurys old, but for some – it’s still in our living memory – but it’s still important to preserve it all, especially as it changes so rapidly – e.g. today I saw some old computers that I never knew existed, yet they were built only 20-30 years ago!

As well as exhibiting computers (almost all are working too!), there is a great display of calculators (mechanical and electronic) and old gaming consoles – probably almost every single one including an old Atari Pong game. I wasn’t into console games that much – the Atari 2600 was about where I stopped, but I was amazed to found out that there were so many!

Go and sit in the Classroom of the 80’s – dozens of BBC Micros all working, enter BASIC programs into them, the PET, The Apple II and anything else turned on. Play on the Domesday machine – a BBC Micro and video disc combination – providing pictures and data from 1980’s Britain, controlled by a BBC Micro and trackball.

It would take too long to even think about listing the exhibits I saw here, but I took a few photos of things that are relevant to my computing life (so far!) Also – look at some of the exhibits – recognise them on TV? If you do, it’s highly likely they came from here, so if you’re planning a TV/Film type of thing and want some retro computers – this is the place to come!

The frst computer I really used a lot was the Apple II – and there are many here – this one is only display: 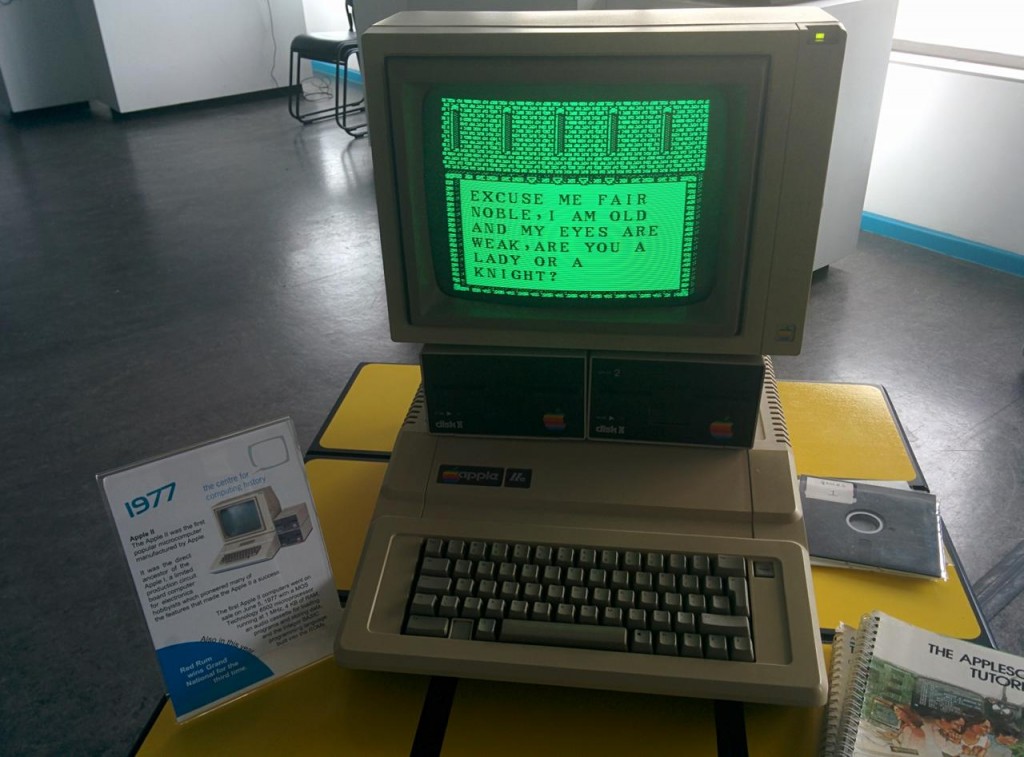 This is an Apple //e which was a follow on from the original Apple II computer. The 2 5.25″ floppy drives above it have a capacity of 130KB each (yes, Kilo Bytes!) 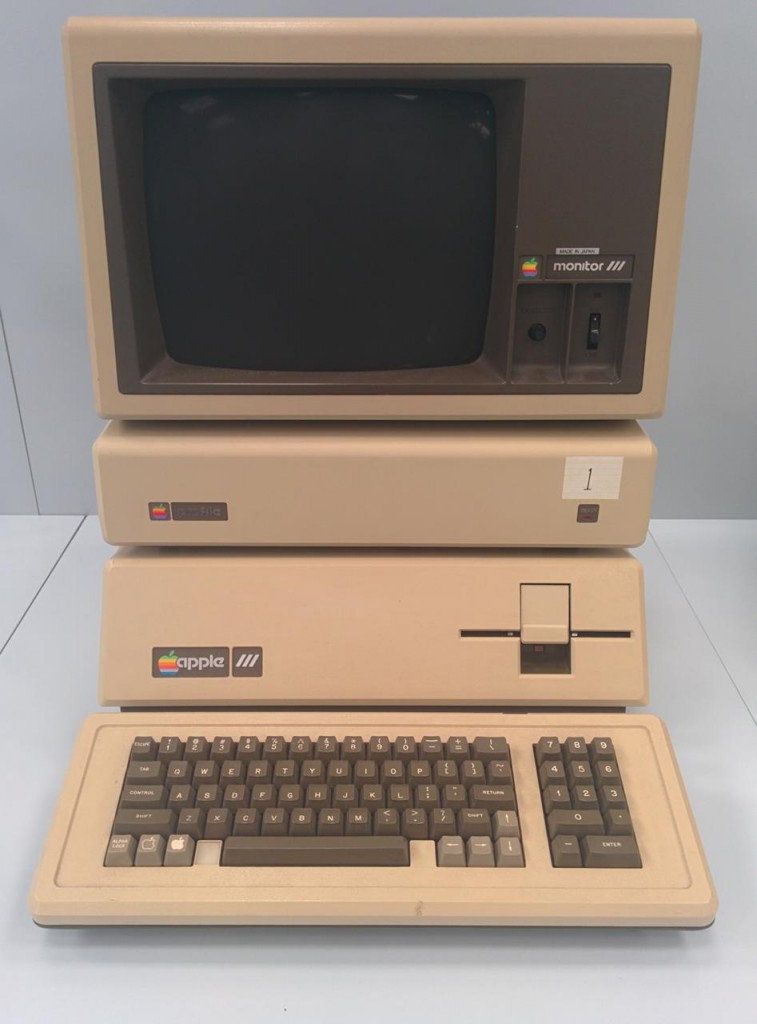 I’ve only ever seen one other of these – in a computer shop in Edinburgh many many years ago! They didn’t sell too well, being eventually replaced by the Macintosh range of computers. 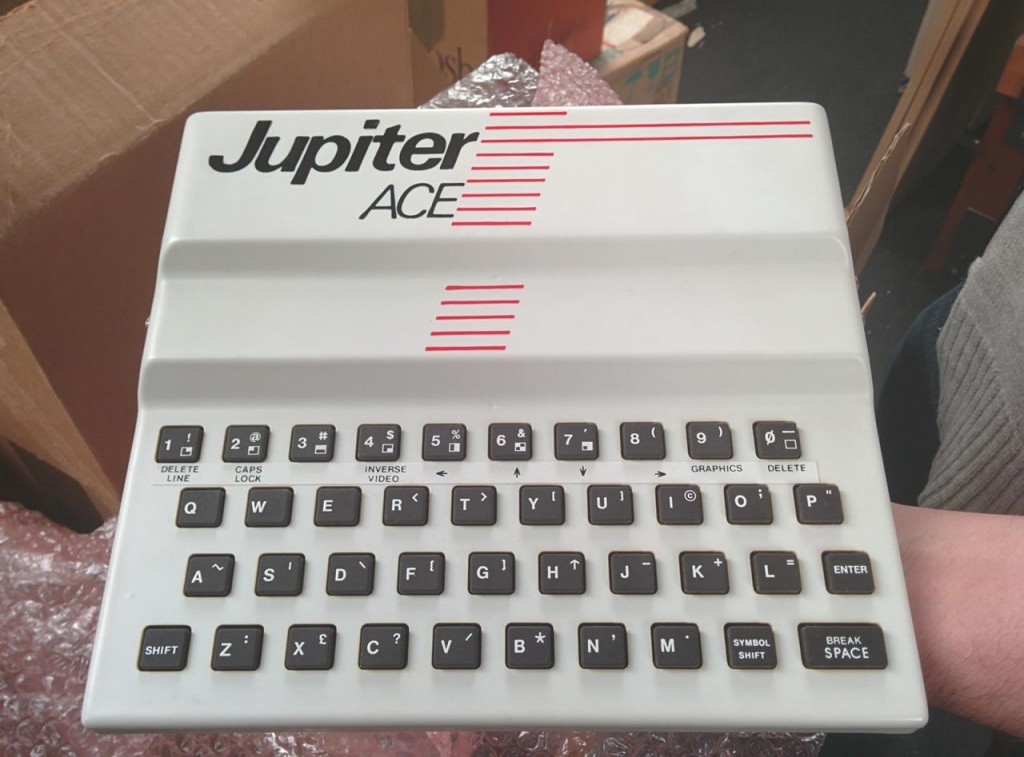 An interesting oddity was the Jupiter Ace. Designed by some of the Sinclair ZX Spectrum designers, it ran Forth rather than the more popular BASIC of the day. (Early 1980’s).  Sales were very low (under 10,000?)

In the late 1970’s three computers really stood out – the Apple II, Tandy TRS-80 and the Commodore PET. Early PETs had a somewhat odd keyboard, but they were an all-in-one solution with integrated storage (compact cassette) and VDU: 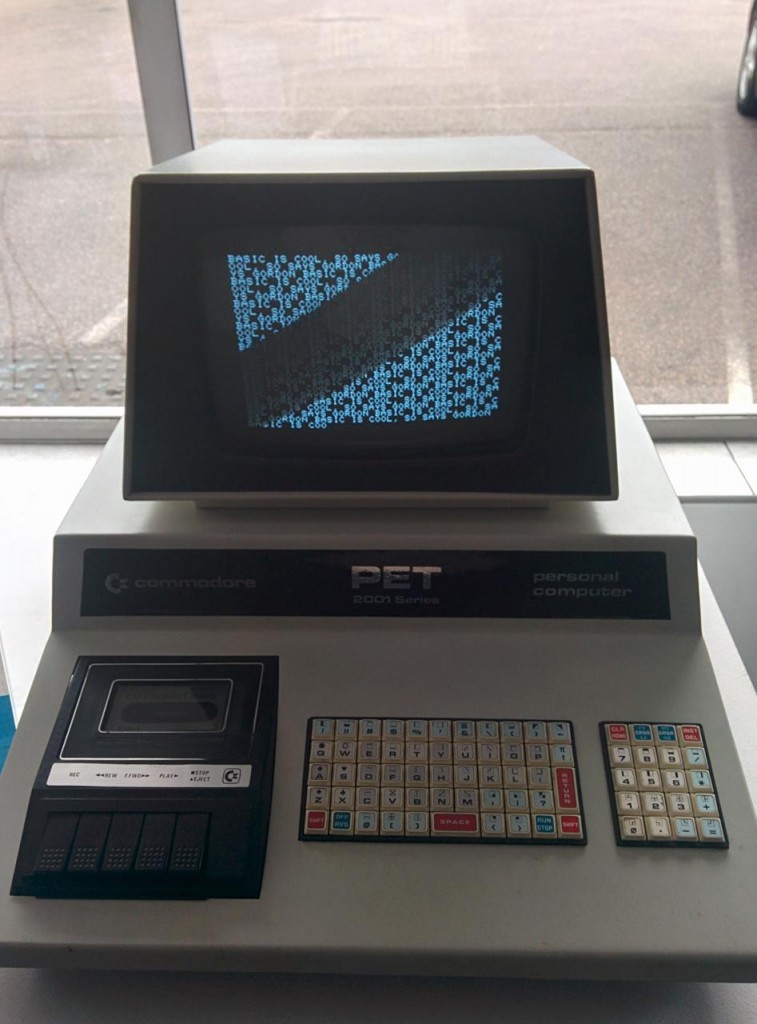 This is one of the very early PET-2001’s with the calculator style keyboards. These were replaced with a bigger keyboard and the tape storage replaced with an external disk drive unit.

As well as some of the newer computers (new as in the last 35 years here!) there are a few older exhibits – Some old Ferranti Atlas computers, DEC PDP8 and 11’s and an Elliot 903. (Which I took a photo off, but didn’t check at the time, only to find now that it’s too badly out of focus to use) I had a summer job programming an Elliot 903 in about 1980 – even though it’s a computer that originated in the mid 1960s!

However is are a couple of old blasts from the past: 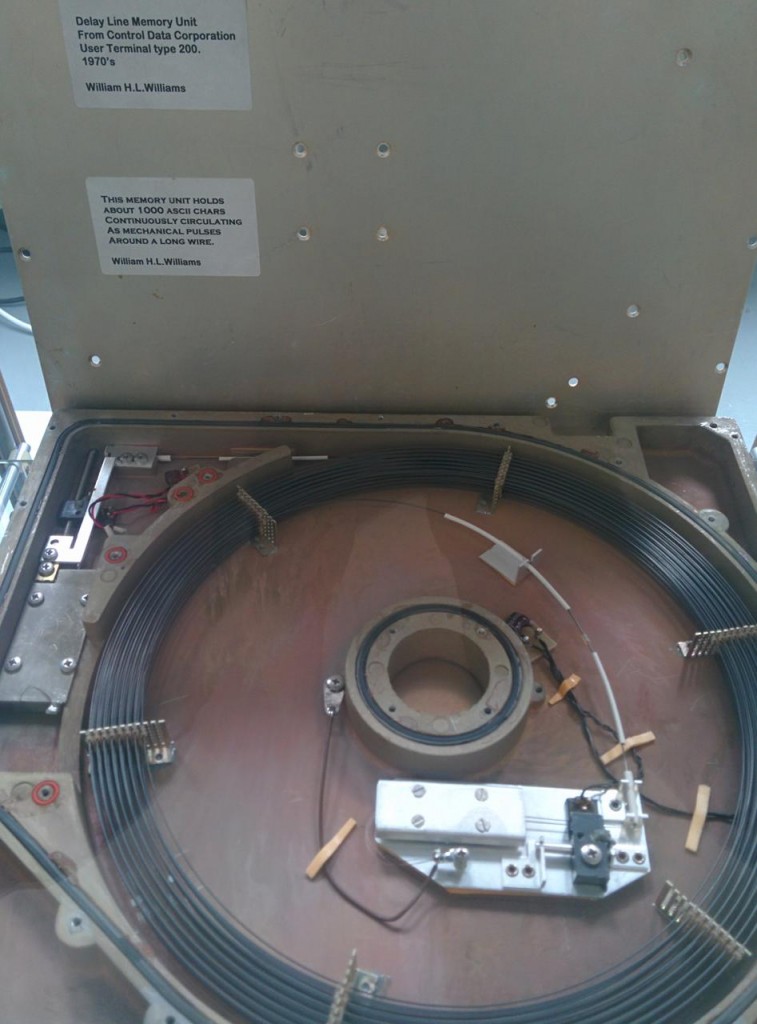 This is a delay-line memory storage device. The principle is simple; Take a long piece of wire, connect a beeper to one end, and a sensor at the other. Pulse the beeper and wait for it to turn up at the far end, then feed that pulse back into the wire. The trick here is that you can send many pulses down the wire before the first one pops out at the end (speed of sound and all that). Keep them being re-generated and fed back in and you have a memory unit. It’s not fast, but devices like this did work and were in-use in many systems. (The predecessor to these were mercury columns!) This one stores about 1000 bytes.

Moving on a few years, we have: 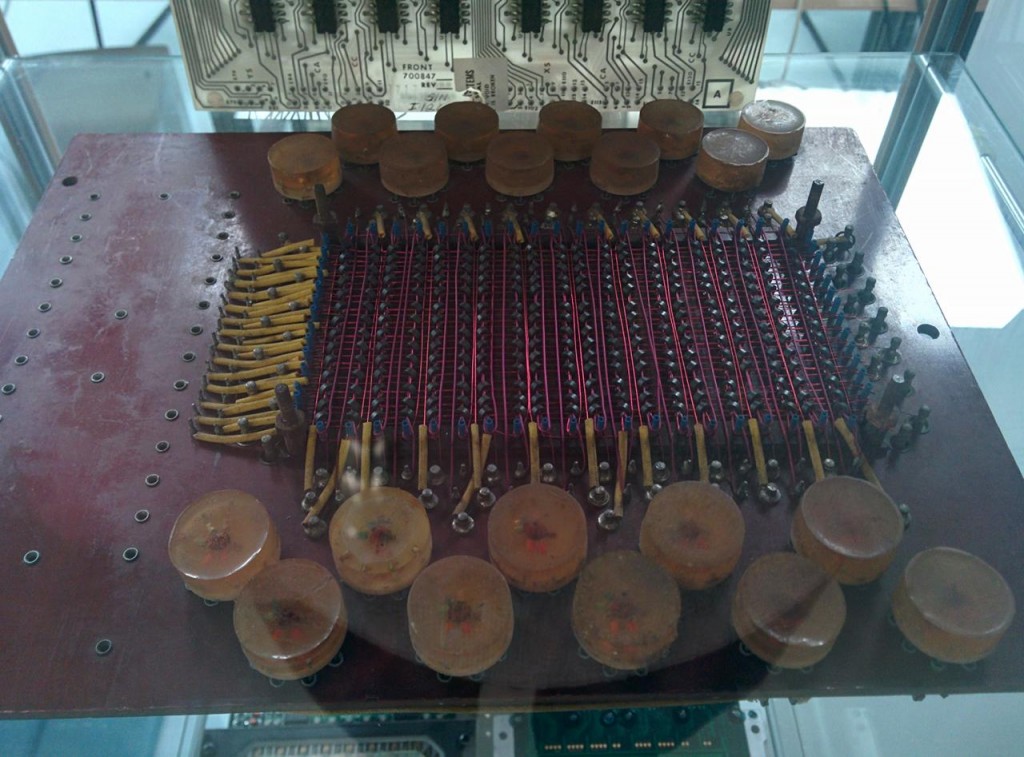 This is magnetic core memory. The link to it on the Computer museum site is here. It’s very old, hand made, possibly for an experimental computer or calculator. If you look closely, you can see the magnetic cores and the wires threaded through them. This block stores 20 x 14 = 28 bits of data… Later computers had much smaller cores and capacities up to 2 megabytes.

Our favorite British computer company, Acorn is well represented in the museum – starting with the Acorn System 1: 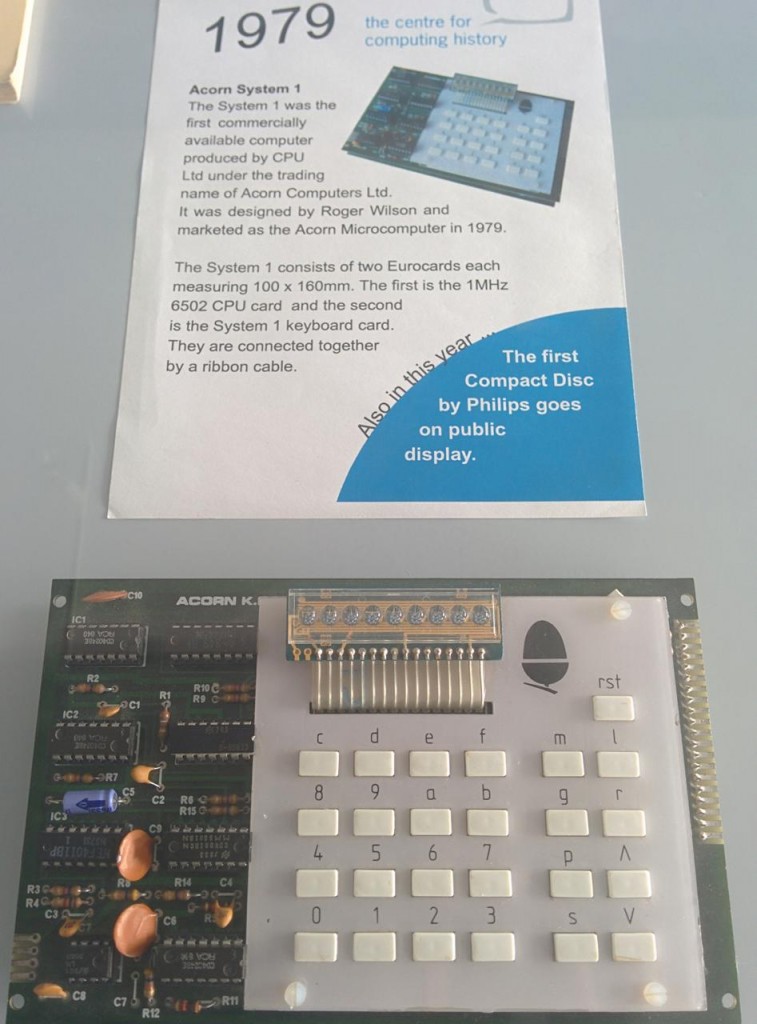 After the System 1, there was the Atom: 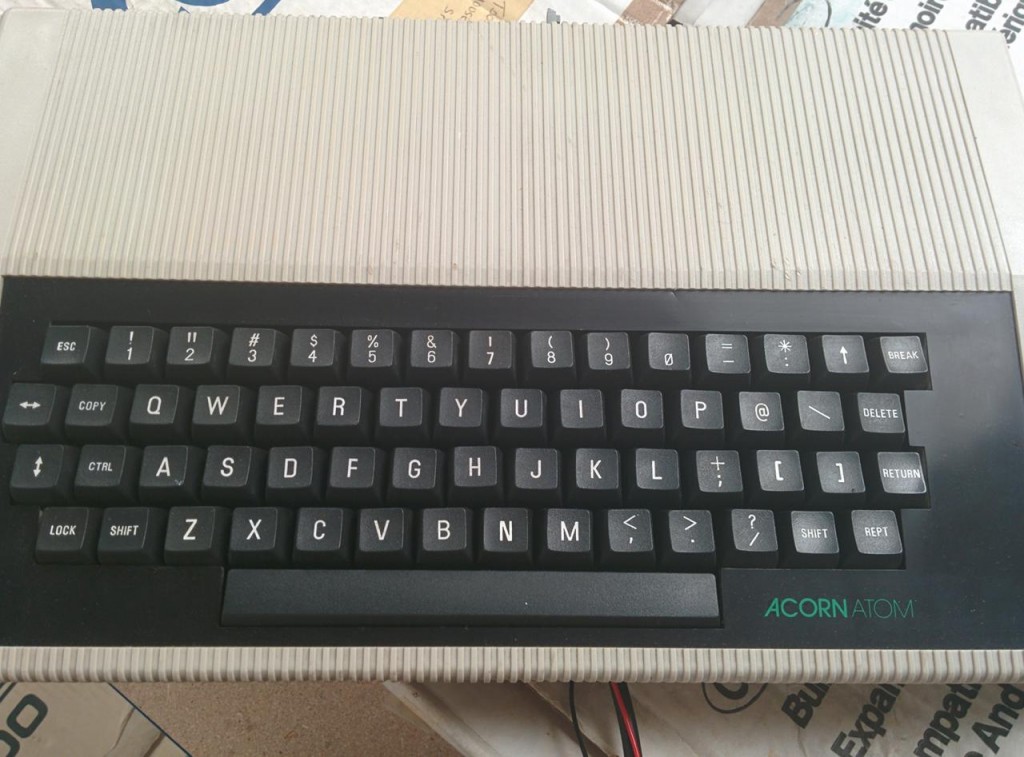 which was the forerunner to the Acorn Proton – or as we know it; the BBC Micro: 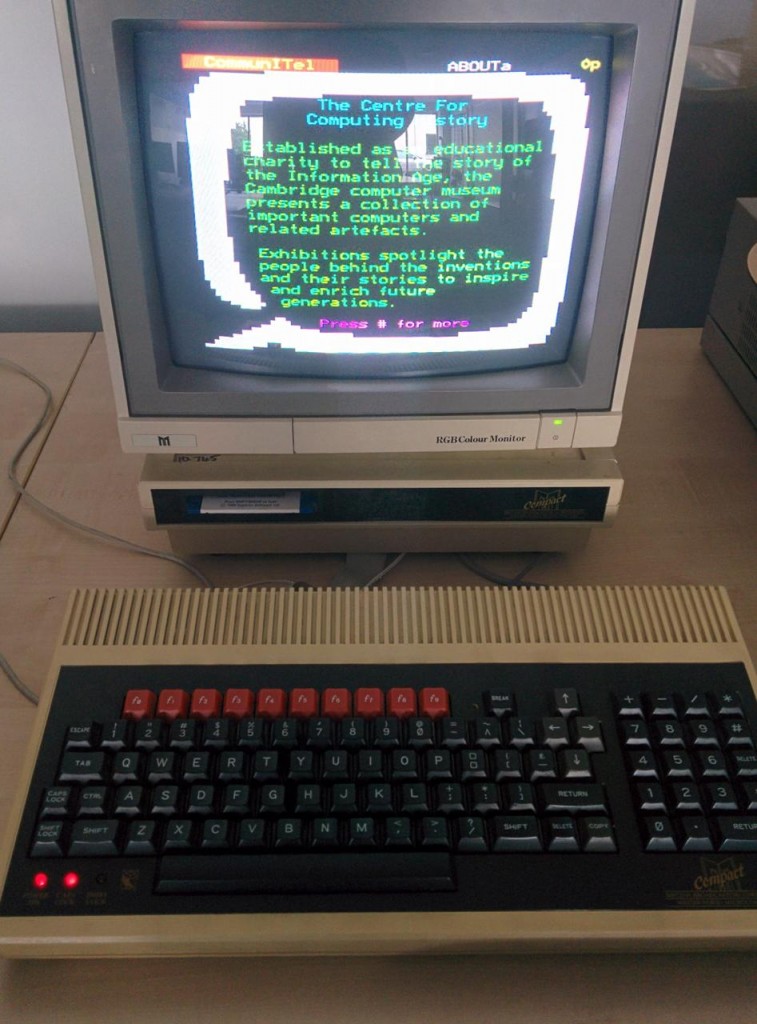 This version is actually a Master Compact – a version of the BBC Master which was the successor to the BBC Micro in a separate keyboard + system case unit.

The history of Acorn is well documented and everyone in the world knows about them – or should do as the “A” in the ARM processor that powers their phone, set-top box, Raspberry Pi and a host of other devices stands for Acorn. (as in Acorn Risc Machine)

Finally, something that never made it: 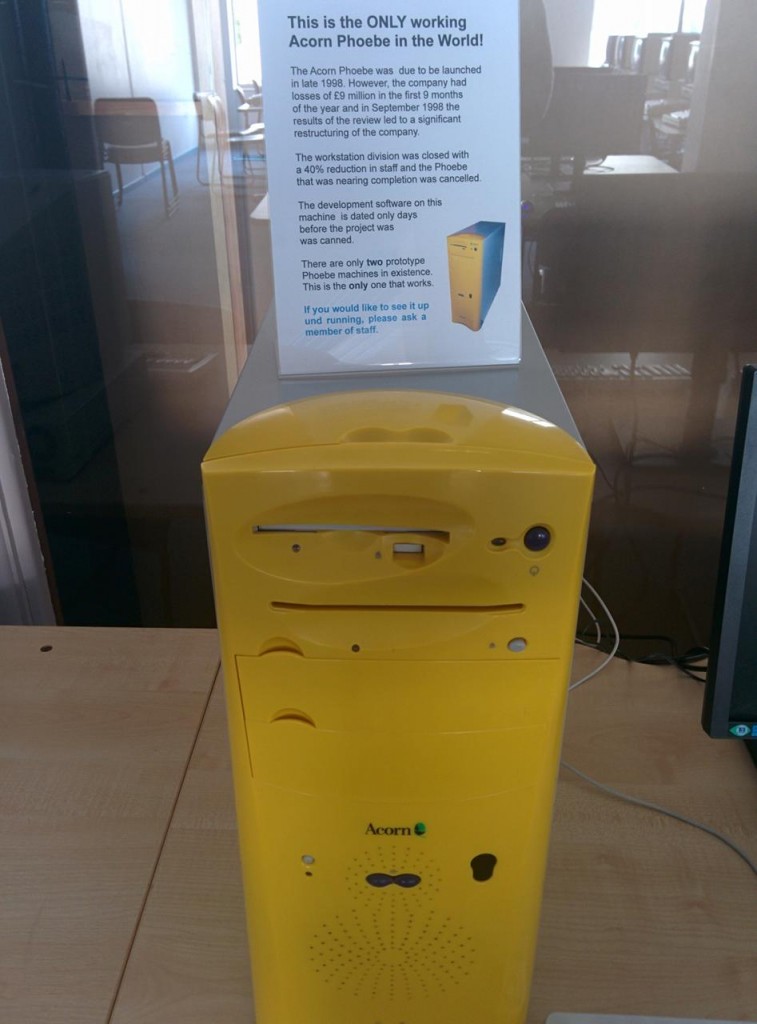 This was the last computer in the Acorn business range – codename “Phoebe”. It’s remarkable as it is an ARM based system supporting multiple CPUs and the now industry standard PCI slots for expansion – as well as a relatively modern and fast graphics system. Literally a day before the launch, Acorn decided to withdraw from the business market and concentrate on other things.

So there you are – just some of my highlights of a visit to the Center for Computing History in Cambridge. If you have time to spare, then go and visit and experience everything. (And if Jason is about, tell him I sent you and ask for a quick peek from the top of the stairs 😉