From the Wikipedia entry:

The Little Man Computer (LMC) is an instructional model of a computer, created by Dr. Stuart Madnick in 1965. The LMC is generally used to teach students, because it models a simple von Neumann architecture computer – which has all of the basic features of a modern computer. It can be programmed in machine code (albeit in decimal rather than binary) or assembly code.

This implementation is written using RTB on the Raspberry Pi and allows manual data entry via the computer control panel or you can use the built-in assembler to load files in its assembly language.

I have added some extensions to LMC to modernise it from its 1965 roots. The first is the JSR and RET instructions. JSR is Jump to Subroutine and RET is return. In keeping with the simplicity of the system, there is only one register to store the program counter for the RET address.  The other additions are for the Raspberry Pi’s GPIO. You can read a pin or set a pin to high or low. See the examples for details.

The RTB/Raspberry Pi implementation features three running modes – one is slow and runs at 10 instructions per second. This allows you to visually see the memory and accumulator changing as well as the program flow, the second is fast mode – the output register is updated, but that’s all, and finally you can single-step a program.

Obtaining the LMC software and examples:

And you should see the main computer screen: 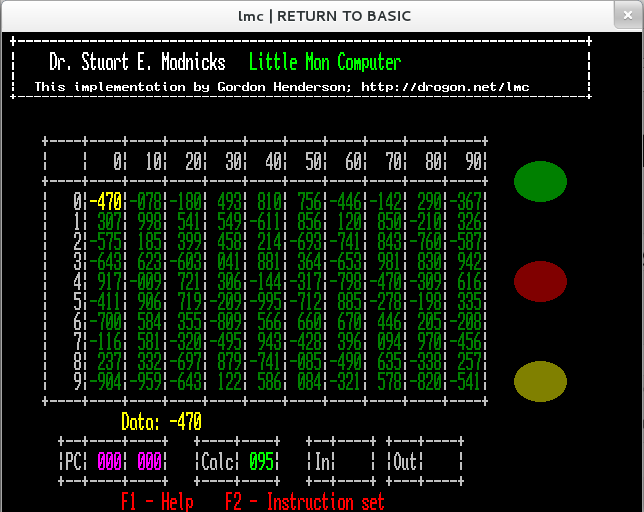 The main memory array is in the middle (full of random numbers at start time), the indicators on the right are Run (Green), Error (Red) and Input (Yellow). All are shown in their “off” state here.

When the program is running in slow-mode, the current instruction is highlighted in Pink with the disassembly also in Pink.

This is the LMC screen at the end of a run of the multiply.lmc program when asked to multiply 6 by 7.

The LMC is controlled by simple key-presses. On the main screen, you can move the active location (memory address highlighted in Yellow) using the arrow keys. To manually enter data or an instruction just type the numbers – the memory locations will only take the last 3 digits typed. Entering 1234 will result in 234 being placed into the memory location. Use the minus key (-) to negate the value. Pressing the Enter key moves to the next memory location.

Note some commands are case-sensitive.

The reason there are separate Load and Assemble commands is because a running program may alter its data, so a 2nd run of the same program may start off with the wrong values unless you write additional code to correctly initialise a location, or separate locations containing constants and variables. With the separate commands here, you can load a program once, assemble and run it many times.

So typically, you would load a program once (L command), Zero the memory (Z), Assemble the program which loads it into memory (A) then run it.

Programs may be edited using any text editor you are familiar with. I’d suggest using nano if you are new to text editing on the Raspberry Pi.

During a program run, pressing the space-bar will stop the program. This works at all times, even when waiting for input.

When the program executes an INP instruction, execution is paused and you can enter a number into the Input register location in the same way as entering a number in the main memory array. Terminate number entry with the Enter key. Pressing the space-bar at this point will abort the program run.

There are many online references for LMC, but I will put the table of op-codes here for reference (And you can see them in the program itself with the F2 key)

In addition to the above, there are 2 extra mnemonics used by the assembler. The first is DAT which is used to pre-load a memory location with a data value and the second is ORG. This is an extension which changes the location of the store pointer at program assembly time. Normally it starts at zero and is incremented for every instruction, but using this, you can place instructions and data at any location. This may be used to help view the data section in the run-time display of the computer which is arranged in 10 columns of 10 memory locations.

To simplify the GPIO access, there is no pin direction control – the GIN, GHI and GLO commands will set the directions as required.

There are a few examples provided:

These are the examples in the LMC Wikipedia page. I have changed the square.lmc program to use the ORG pseudo instruction to place the constants and variables starting at location 90. That separates them from the program code so you can more easily see them changing as the program runs.

Example to multiply and divide 2 numbers together. The program stops and you enter the first, then the second number and it calculates the result. (first * second, or first / second)

Blink is the ubiquitous blink example which flashes the LED on pin 0 (BCM_GPIO 17). Blink8 does a simple sequence of the first 8 pins/LEDs. (wiringPi numbers 0-7) I tested it on my ladder board. If you have a Pibrella board, then blink will toggle the Yellow LED. blink8 will run on it, but would need changing (left as an exercise to the user 🙂

If you have a Pibrella board from Pimoroni plugged into your Pi, then this is a very simple traffic light program. Run it is slow mode. When started, it will light the Green LED and wait for the button to be pushed. When pushed, it will cycle green -> Yellow -> Red, then wait for 5 seconds or so, then cycle back again. It’s also a demonstration of the JSR/RET op-codes too.