So M-Shed in Bristol hosted Bristols first (mini) Maker Faire today, so a quick (well 2 hour!) trip up the A38 and M5 and myself and Rachel arrived in the morning to what initially looked like a somewhat chaotic bunch of random people setting things up…

We checked the talks timetable, booked ourselves into the first couple of talks and the afternoon one by Eben (or so we thought – more on that later!) then went for a coffee…

M-Shed is a pretty interesting place in its own right – a nice little museum exploring some of the history of Bristol, and as someone who lived in Bristol for a few years it was nice to have a look at some of the exhibits. It does warrant another trip too, it’s quite a nice little gem of a place. I left Bristol just over 10 years ago and all that area was just in the process of being re-developed at that time and the whole area looks quite good now too. (On both sides of the floating harbour!)

So the Maker Faire is basically just a bunch of folks showing off and hopefully trying to get others enthused into their projects – there are some commercial companies sponsoring the event and it was good to see Pimoroni – makers of the infamous Pibow case for the Raspberry Pi there and chat to the chaps, as well as a few other small companies selling components and embedded processor boards (e.g. Phoenoptix, Soldersplash) as well as Element 14 and many others. (Sponsor list here)

There were also lots of enterprising individuals, and of-course lots of non-computer/electronics makers too! Bronze casting, knitting/weaving, pottery/clay work, soft-drink making – something for absolutely everyone.

The Bristol Hackspace took up a lot of space in the middle and were demonstrating many varied and different projects – from old pen plotters to their BBC Micro connected to a Raspberry Pi sending & receiving tweets! Sometimes I wish I’d never left Bristol, but life’s just fine in Devon!

The talks we attended were very interesting too – Justin Quinnell’s pinhole cameras was a talk about long exposure (days. months, years!) using home-made pinhole cameras – something I absolutely must do! It was also very good to listen to Eben Upton and chat briefly to Liz after the talk too – although I’ve heard Ebens Raspberry Pi talk before, it’s always changing as new things happen, and always good to see what’s at the forefront in Raspberry Pi land!

One almost disappointment was that we were unaware that we had to register for the talks before-hand – it is on their website – in small print in the banner-ad area, so was overlooked, fortunately there was space, however when we went to “register” for the talks in the morning this wasn’t made aware to us at all. It actually seemed a little disorganised on the whole (certianly at 10am when we turned up when it was supposed to open!) However it didn’t distract from the enjoyment of the day. I suspect they got more than they bargianed for – which is good, as it means that hopefully Bristol will host another Maker Fair – it’s something that I really feel the South West needs to help bring like-minded people together.

Photos of the day – some even have captions… 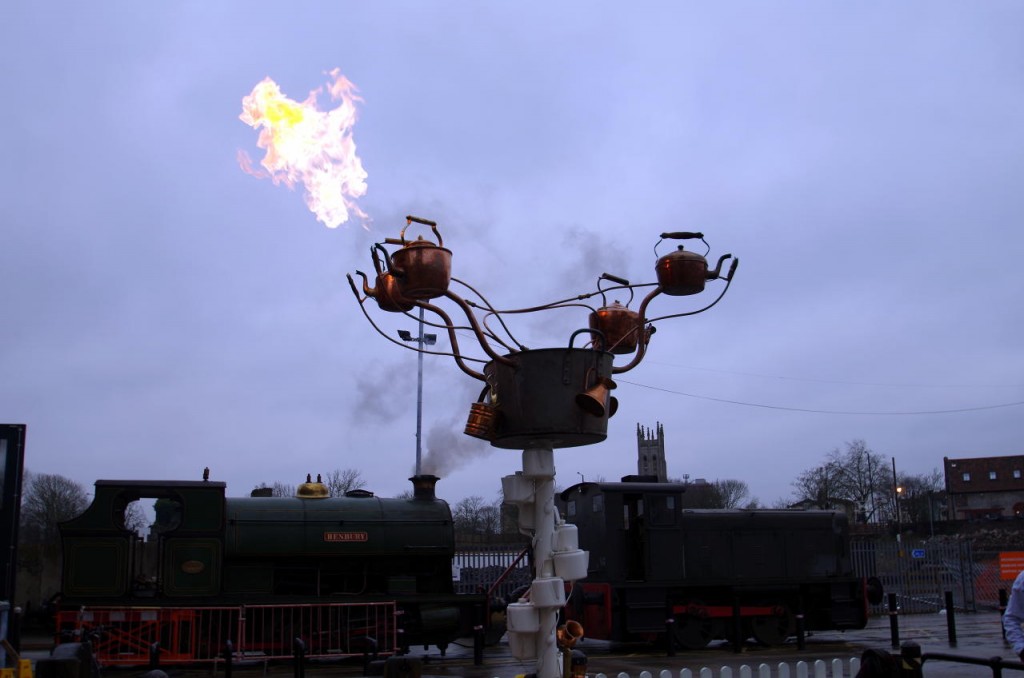 Some kettles blowing fire that make a little noise and heat, in-front of a kettle boiling water that moves things. (The firey ones from http://illuminarium.co.uk/) 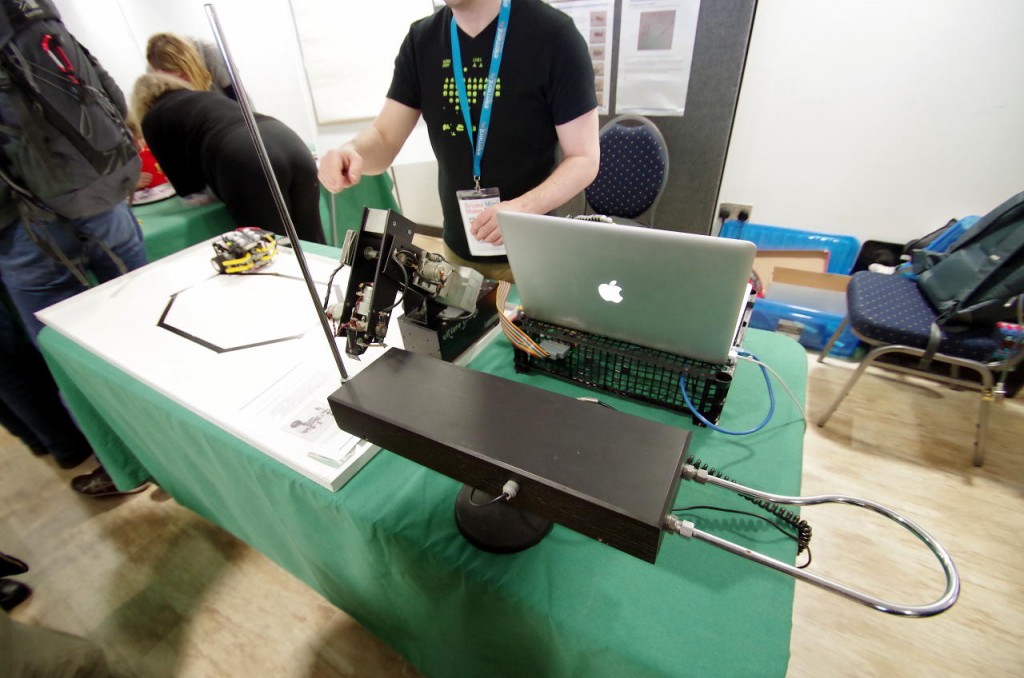 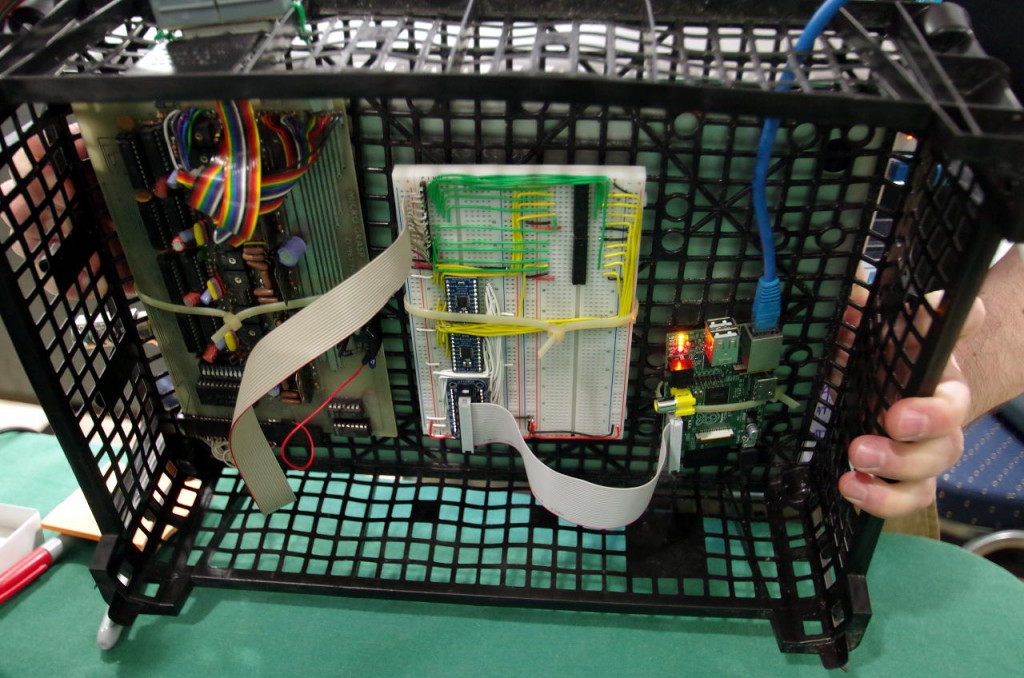 and this is the Raspberry Pi driving the robot that’s “playing” the theremin! 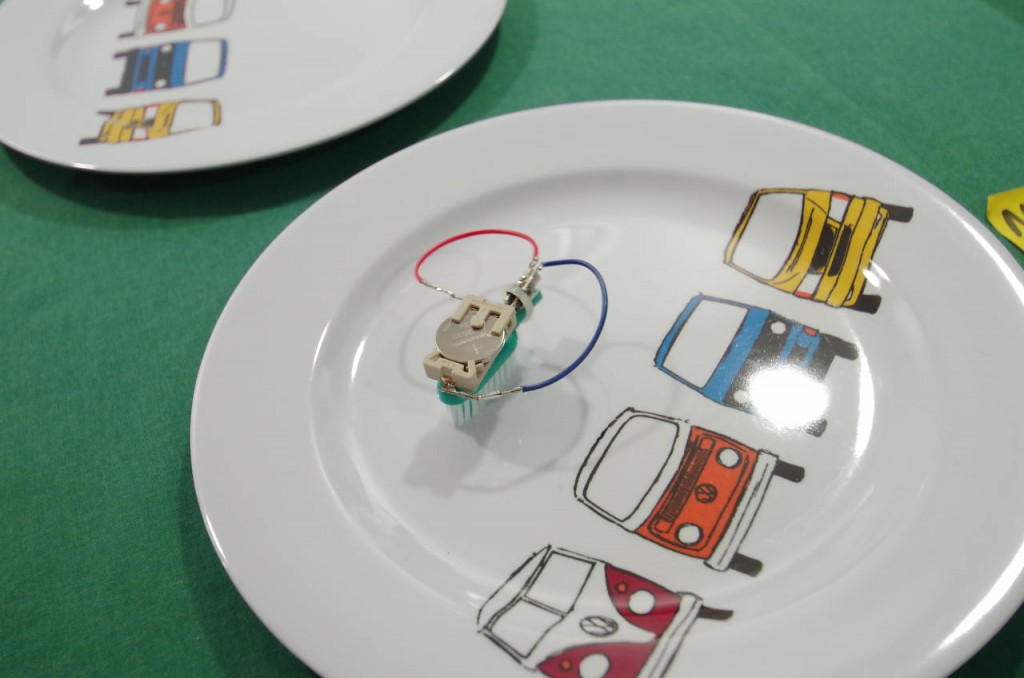 Take one toothbrush, one little vibration motor out of a mobile phone, a little battery holder and coin cell and put it on a plate… Bzzz…. and off it goes! 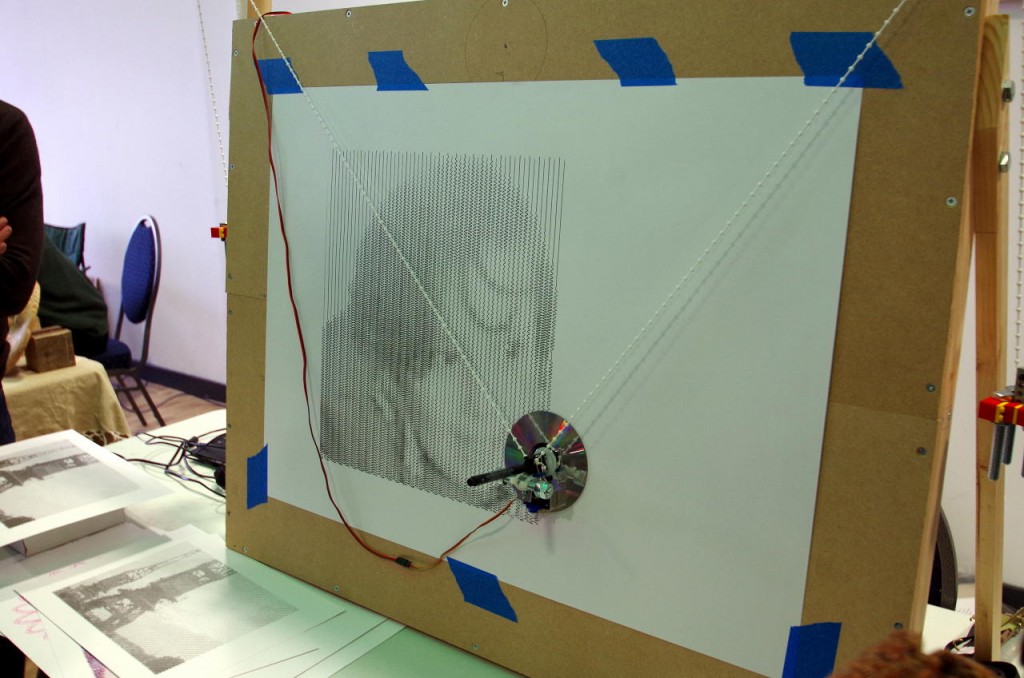 Take an EggBot to bits. Rebuild it as this. Re-write the software and off you go (See: http://www.fastness.co.uk/)

Take a relay with 4mm banana sockets and put some bulbs on it: 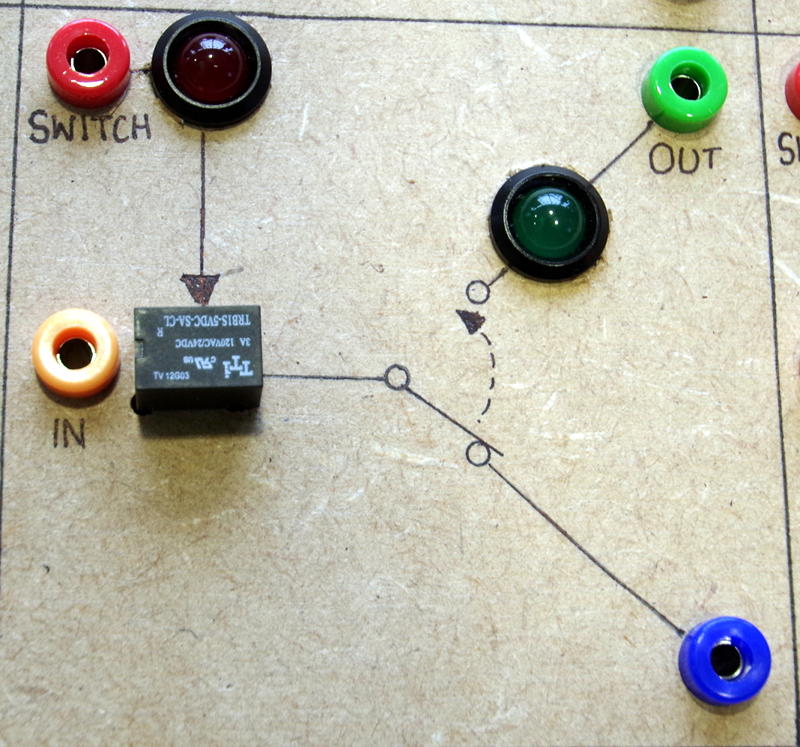 Now put many of them on a big board: 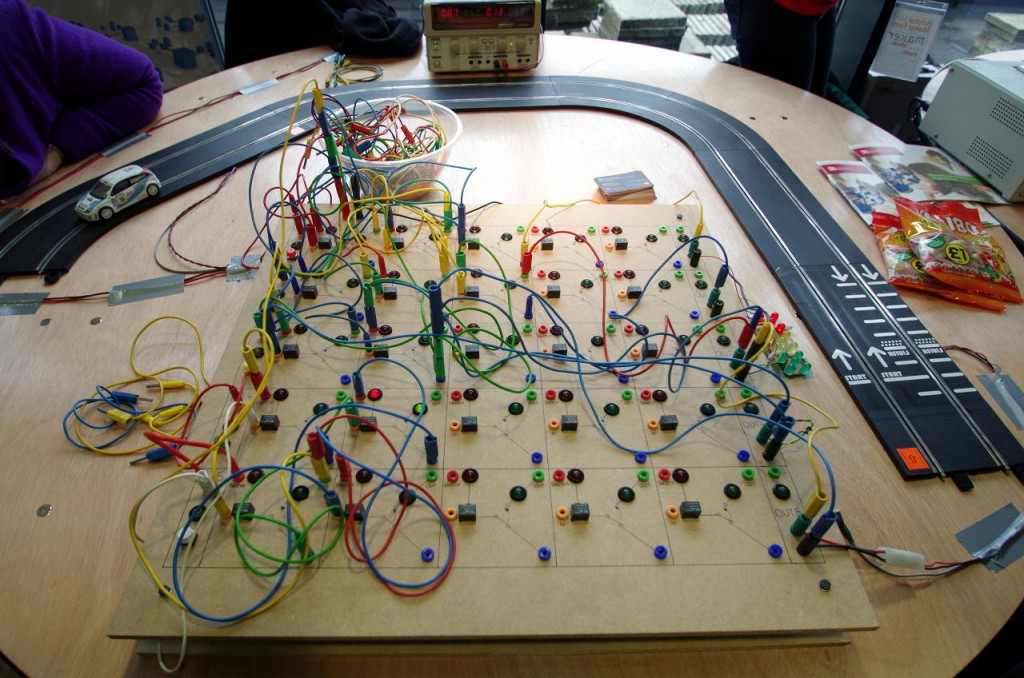 and you get an excellent relay-logic board, capable of creating simple logic (and not so simple!) gates, with the ability to perform simple control tasks here. The top of the board is a switch to enable power to the track and turn power off before the car falls off the end. This was made by students as part of the Bristol Hack Kids project (as far as I can tell – please correct if I wrong!) part of the Bristol Hackspace. 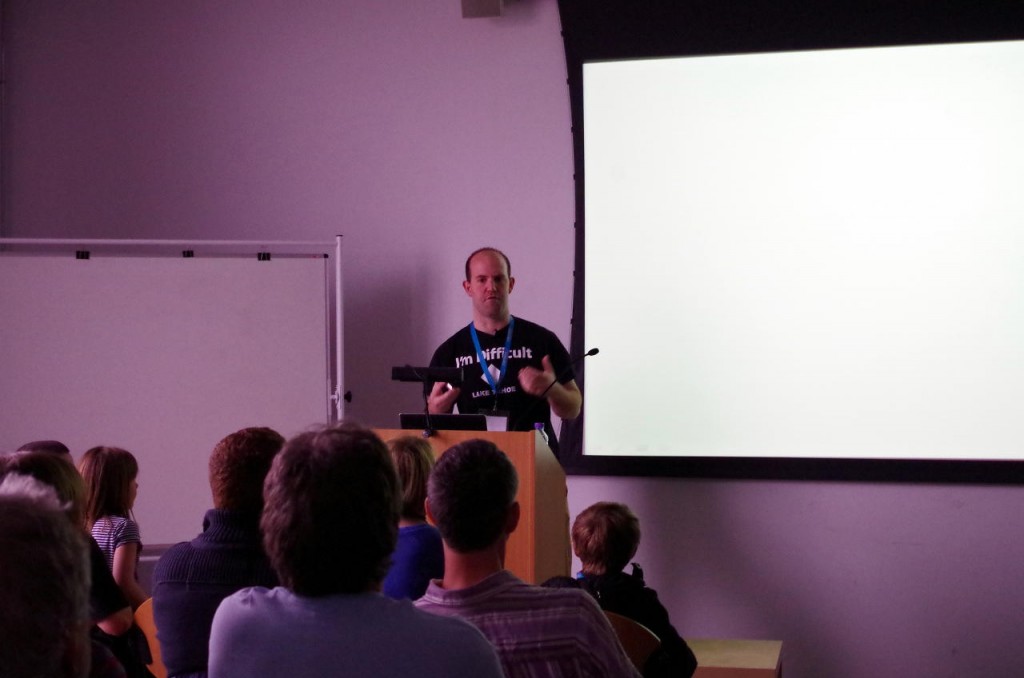 There was much more going on too – trouble is, I don’t think to photograph stuff all the time, so you’ll just have to look at their website and find other peoples blogs!

So all in all, a grand day out and it does remind me that maybe I should go back up to Bristol more often!