A few of you may know that I do the home artisan microbakery thing. My pages for that are over here: http://moorbakes.co.uk/ but in these posts I thought I’d show you a day in the life …

I make mostly sourdough breads for sale directly and in a few local community shops. It all started as a hobby, then developed a bit more as a sort of therapy to help with some health issues, then it got out of hand and I was doing afternoon teas for weddings, office party buffets, local farmers markets and I ventured into the lovely world of patisserie, however that all got too much and today I’ve scaled it back down a little so I can concentrate on other things – notably some IT projects, weight loss consultancy (to help others undo all those years of eating too much bakery goodness!) and give a little time to an older passion; horse riding (and perhaps more on that later)

All in a days work

A bake is split into three parts over two days – preparation of the sourdough starters, mixing the dough, then (the next day) the final shape/proof/bake.

This starts mid-afternoon the day before the breads are baked. Clean and sanitise the work area and fetch the starters from the fridge.

Sourdough is just a fancy name for a natural yeast culture. Some may suggest the name refers to the old “Sourdough Joes” who roamed the wild west, some may suggest it’s due to the presence of lactic and acetic (and maybe other) bacterias that come along for the ride giving it a midly sour taste and some may think it refers to a particular style of bread – whatever – to me, it’s just a natural, slow acting yeast.

I keep 2 different types in my fridge: A white wheat based one and a wholemeal rye based one. They don’t have names – they’re just my starters.

I measure them out into big bowls and add flour and water to make enough starter for that evenings dough mix. The jars are then topped up and left out with the big bowls until later that evening. This gives the left-over starter in the jars a chance to start again and get active and bubbly before being consigned to the dark recesses of the fridge until they’re needed again.

As I type this my starters are about 8 years old. Maybe older. I got the rye starter from someone who’d had it for 5 years and they got it from someone who’d had it for 20 years. What does that mean? Nothing really, only that we’ve been able to keep something going for all that time. I know that some people are proud of how long their starters have been living, but the reality is that it’s really “triggers broom” syndrome. All the living stuff reproduces and dies off in a matter of weeks, so it’s really unlikely that what’s in the jar today contains not a single molecule of what was in the jar when I started them. (And every now and then, I transfer some to a new, clean jar and the old ones go into the dishwasher) 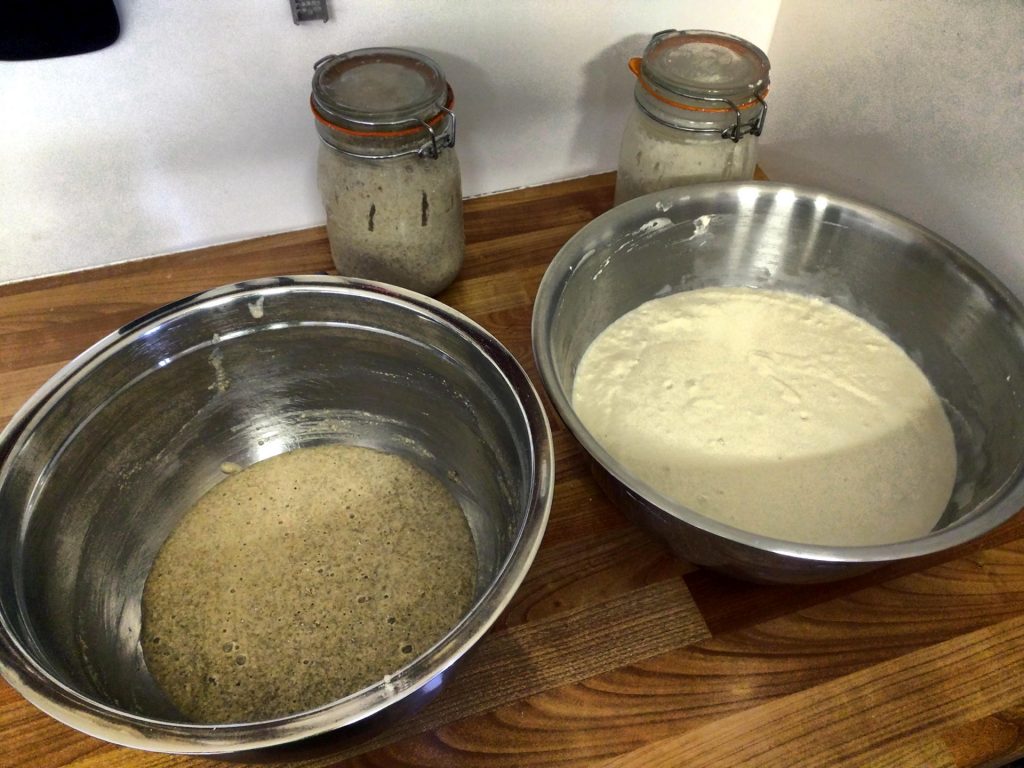 That’s the rye on the left and wheat on the right. The bowls are covered and left for a few hours and I get on with more preparation which involves weighing out the flour mixes for the mixing that evening. 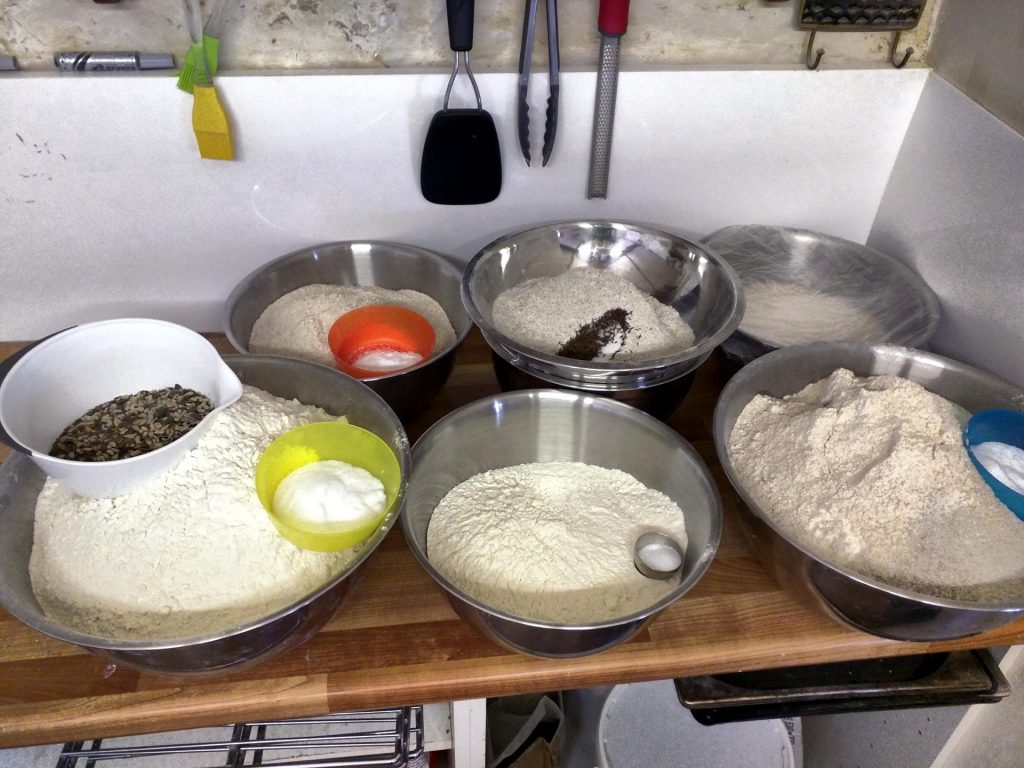 That’s most of what I need for that particular evening. A batch of multiseed loaves, some white dough,wholemeals wheat  and my Moorbakes Sourdough. The rye flour, etc. is on-top of the rye starter bowl and I use shower caps for the other starter.

Speaking of rye… I mill my own, and wheat sometimes too. I get organic rye (and some wheat) directly from local farms wherever possible. I use organic ingredients wherever possible, although thanks to a cartel of half a dozen or so “certifying agencies” in the UK I am unable to call my breads organic unless I pay them a lot more money than I’ll ever make from selling my breads, sadly.

So that’s about it, however on that particular day (it was a Wednesday) I also chop and grate some extra strong cheddar cheese for the cheese breads I make on Thursdays. Total time is about an hour, so now I clean any mess and get on with other stuff until later in the day.

On to page 2, the evenings mix and knead