Stage 2, but if you missed it, then back to the preparation step…

Preparation takes place usually at about 3-4pm. A few hours later round about 7:30 to 8pm, it’s time to mix and knead up the doughs which are then left to ferment overnight. 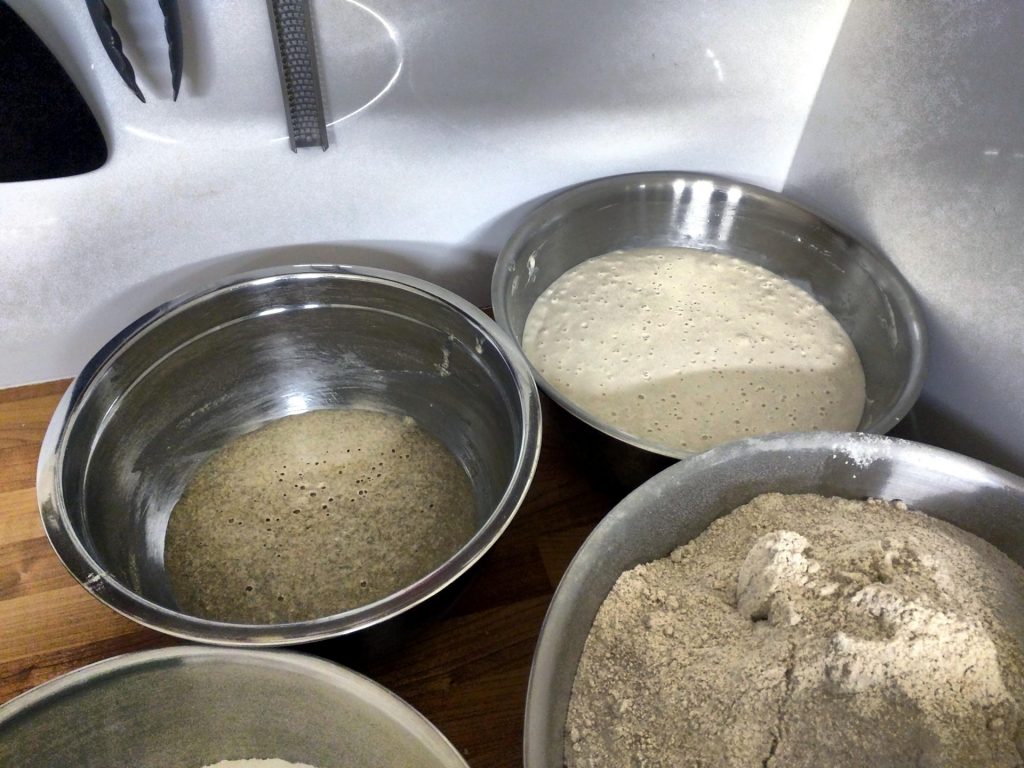 These are the sourdoughs after 4 to 5 hours. They’re nice and bubbly and ready to use.

Now, it’s mostly a matter of weighing up the water and sourdough, tipping that into the mixer, then the flour – giving it a good mix, finally adding in the salt for a few minutes more, lifting it out the mixer and repeat the process… 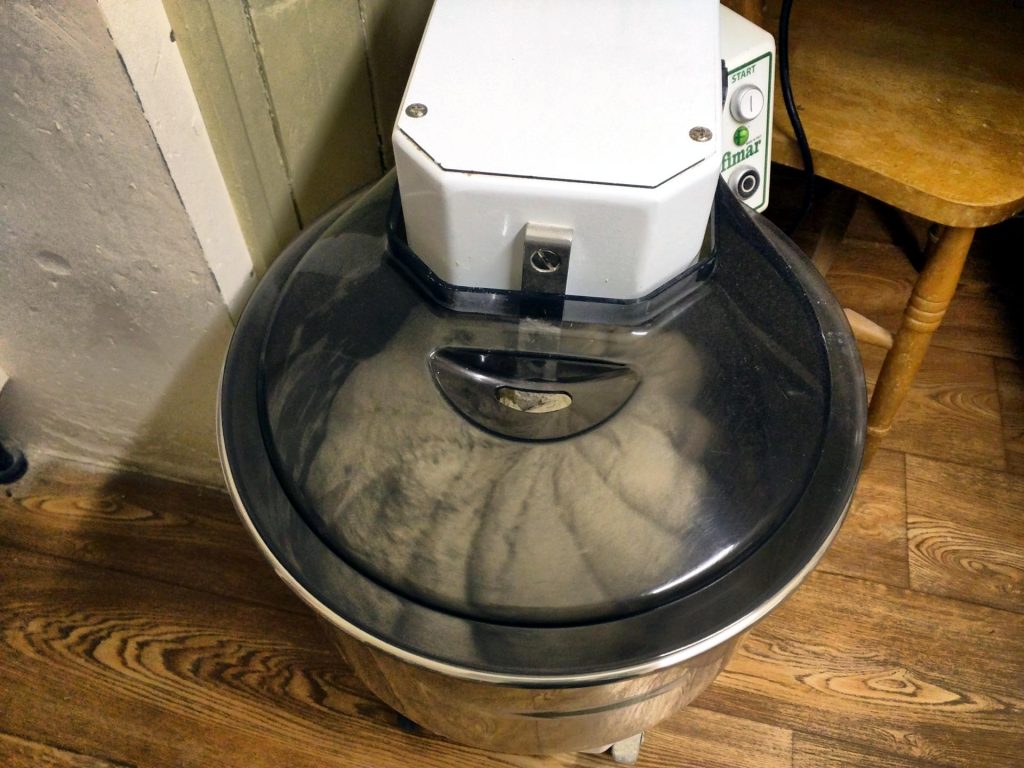 This is the spiral mixer. It’s single speed with a fixed head, so getting the dough out requires a certain knack, as does cleaning it. Spiral mixers are very common – this is an Italian make and you’ll find these used in pizza parlours the world over. 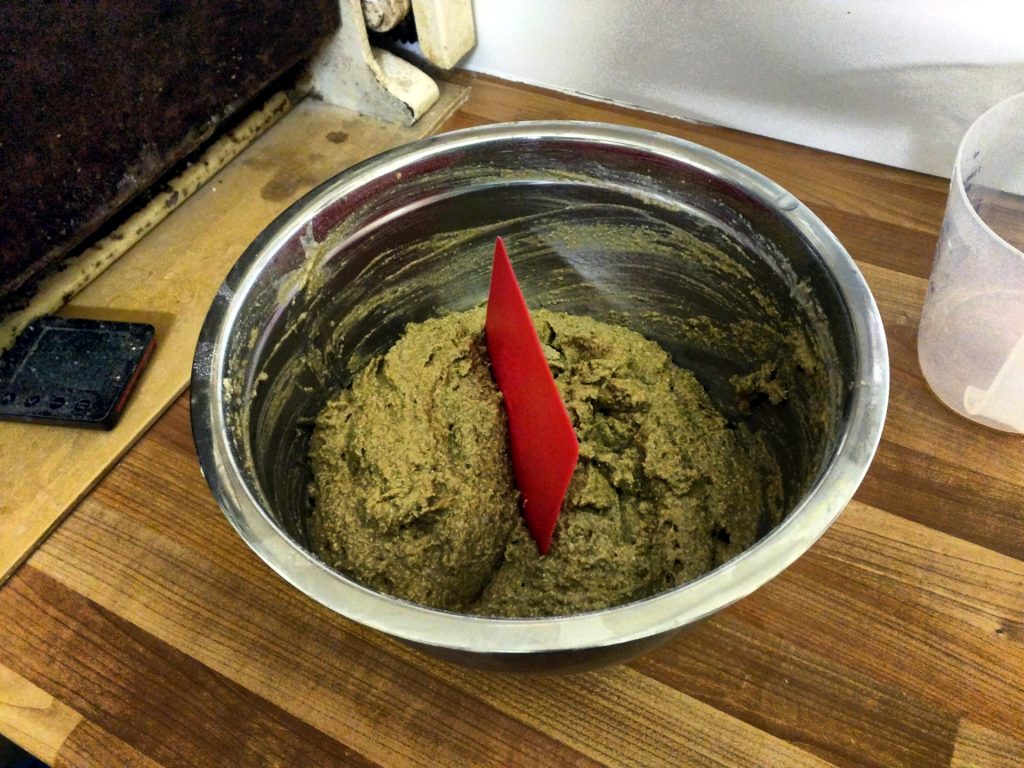 The rye is mixed by hand – only a few loaves usually and it’s a very wet and sticky dough. Gluten doesn’t develop in rye the same way as wheat, so there’s no point trying to knead it really. Keep it wet with a sourdough starter and it’ll be just fine. I add caraway seeds, malt and molasses to mine. 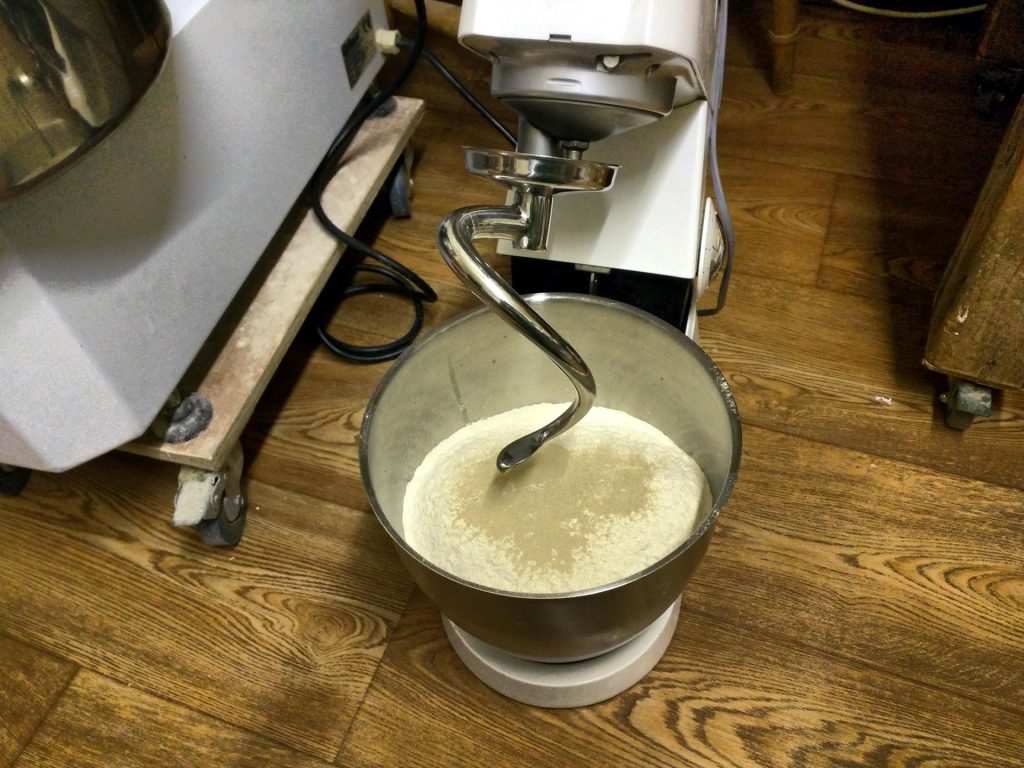 The overnight white dough that I use for the cheese breads is an olive oil based dough with just a fraction of the normal yeast added (it’s not a sourdough). This is mixed in a small stand mixer that I was able to get a nice dough spiral hook for. These are much better than the usual hook you get with them.

After that, it’s just a matter of getting the liquid ready for the next mix/knead in the spiral, emptying it, dividing the dough into lumps that will fit the containers, splitting up the rye into tins and trying to keep sane… 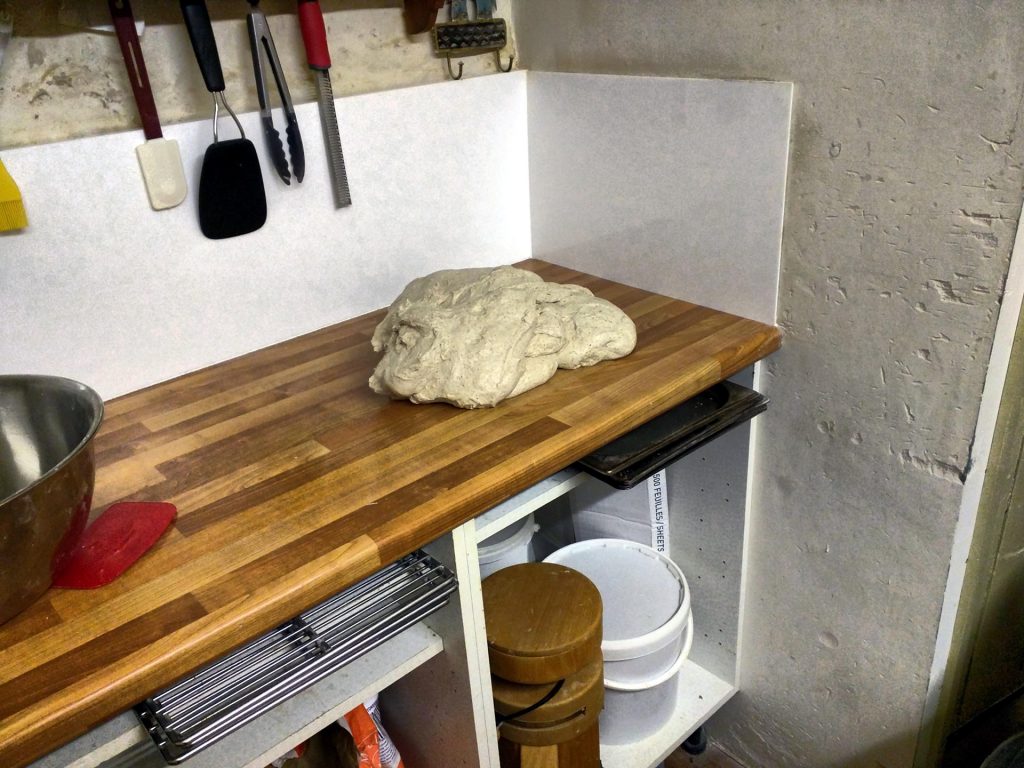 This is a lump of dough taken out of the spiral mixer and left to rest on the bench while I load it up with the next batch. I try to keep the mixer going all the time so I make sure I have everything ready to load it with as soon as I take one batch out. I also try to plan the loads to avoid too much of one type of dough getting into the next batch, so the seedy ones are often last with the plain white (when I do them) first. This day I had 3 lots through the spiral mixer – my usual sourdough which is a mix of white, wholemeal and rye, then a seeded mix, then the 100% wholemeal. I’m not overly concerned if a few seeds get into the wholemeal – I stopped using the main allergen one a long time ago (sesame seeds) 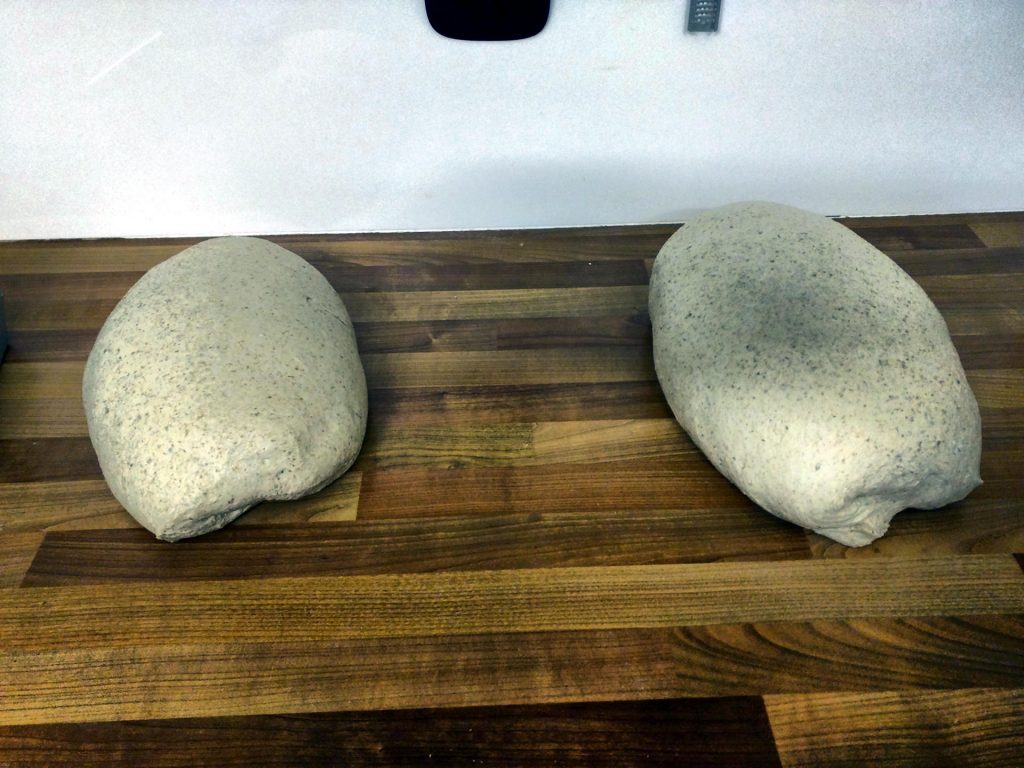 This is a load from the mixer that I’ve weighed and divided into two – the smaller on the left will make exactly 5 loaves and the larger on the right will make 7. My largest tub will only take dough for 10 loaves, so the split is needed. 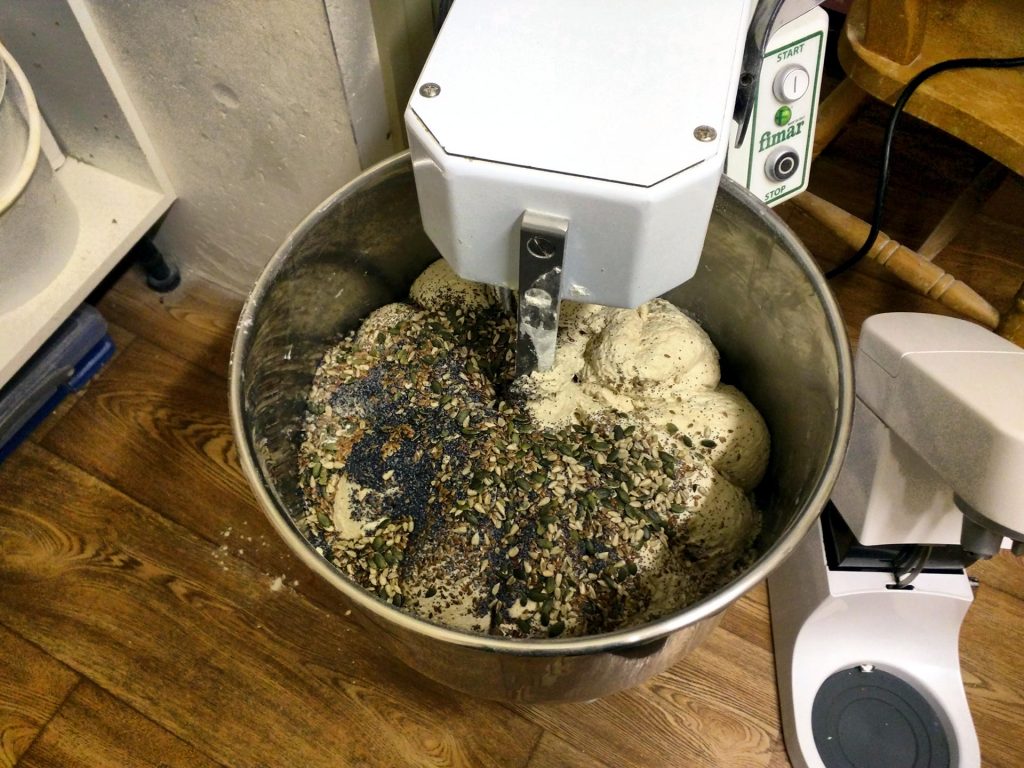 Here is some multiseed in the mixer. I get the dough formed first, then add in the seed mix – I make it up myself and is a mix of poppy, linseed (brown and golden), pumpkin and sunflower seeds. I used to buy a commercial mix that included sesame but even though my labels were clear on what was in them, I decided to drop sesame a while back due to some very public issues involving a fatality due to a mis-labeled product. (Pret a Manger) 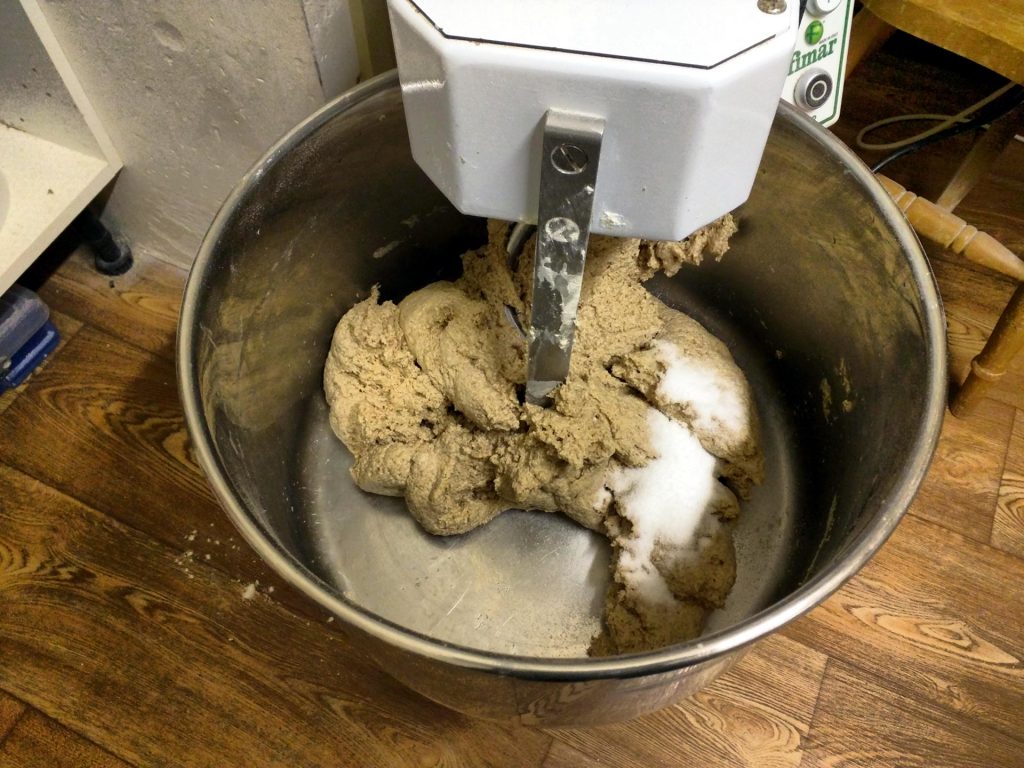 Last through the mixer is the wholemeal. Here it’s had the initial mix and I’ve just thrown the salt into it. (It’s a bit of a wet mix, but not as wet as the rye!) 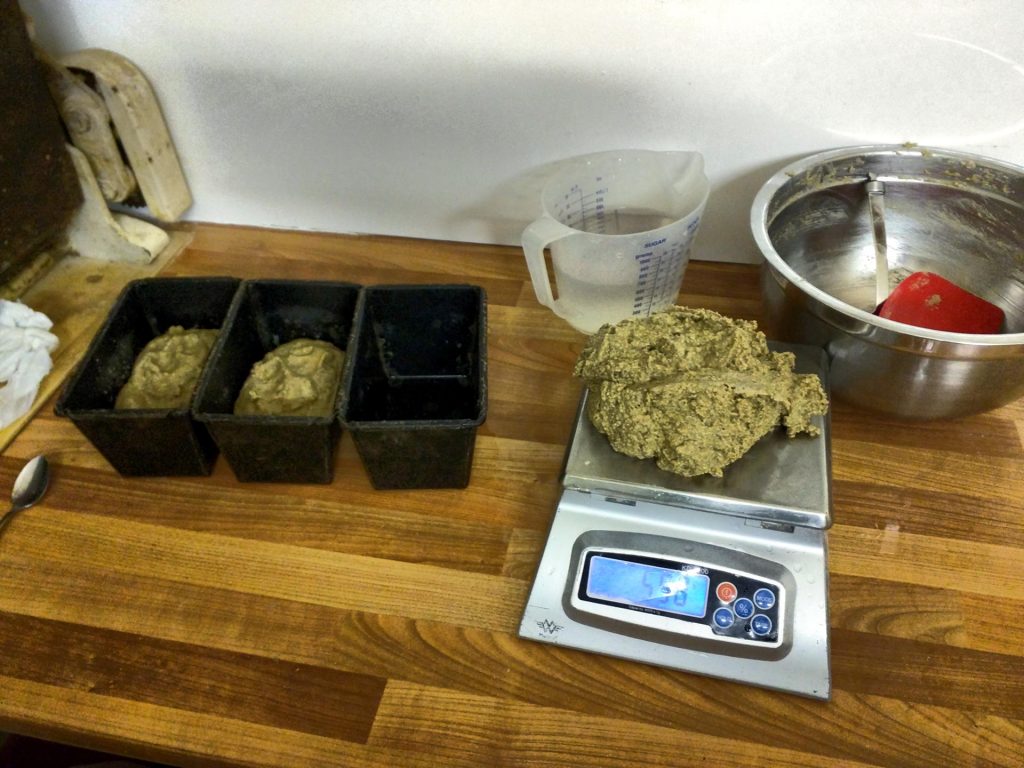 While all the machine mixing is going in, I find a few moments to scale out the rye into tins. These stay in the fridge overnight and rise slowly there and are first in the oven in the morning. 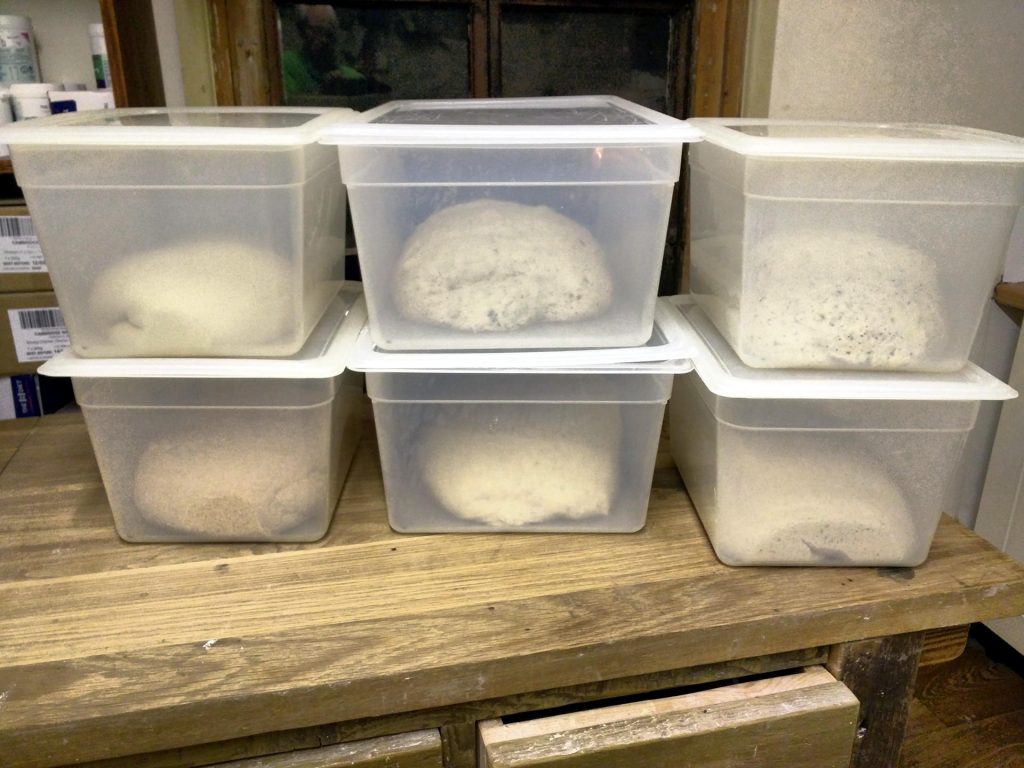 The dough is moved into the tubs as it’s mixed and kneaded and gets left there overnight. Now it’s clean and tidy the place up, have some supper and off to bed! 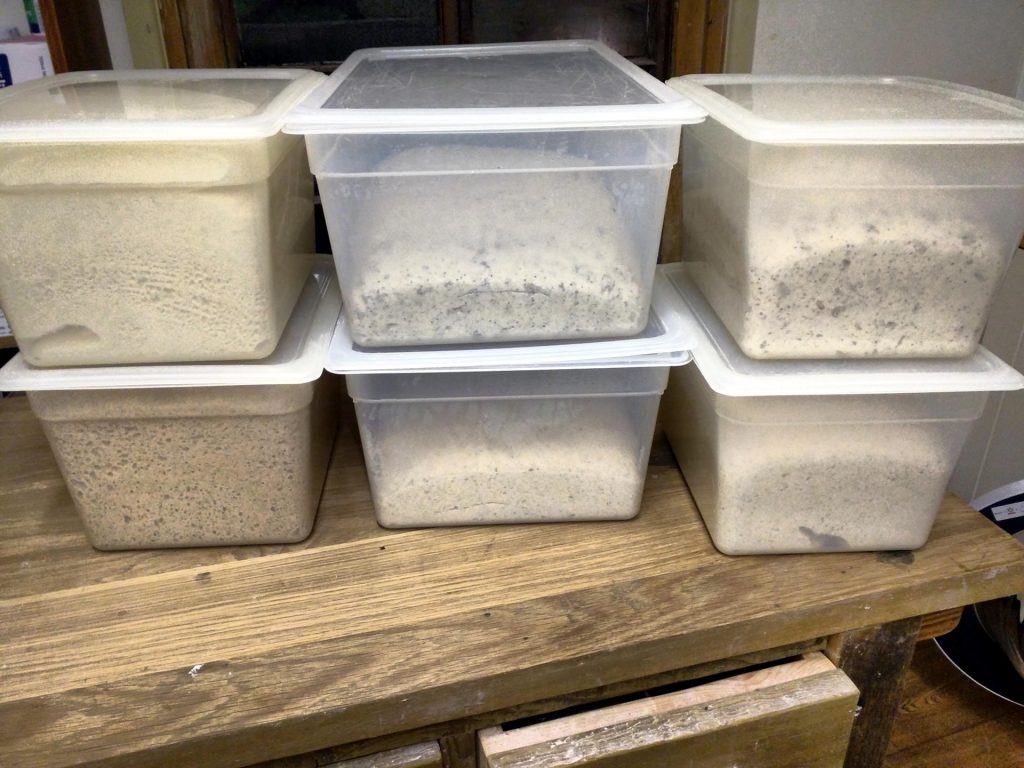 This picture really belongs in the next post as it’s tomorrow morning, but I’ve put it here to compare with the one above. You can see how much it’s all risen. The left 2 tubs are the white olive oil dough and the wholemeal dough – these are both made with dried yeast, although only a fraction of what you’d typically use for a standard 1-2 hour process.