This is just a short follow-up to the last post; Comparing BASICs… There, I talked about the differences between BBC Basic and what was effectively a Microsoft BASIC (EhBASIC), however I decided to take a few moments and have a proper look at the published MSBASIC sources to see if I could make it work on Ruby.

And an hour or 4 later – yes. Success with the Commodore version 2.0 – obviously without the “KERNAL” part which is the Commodore equivalent of the Apple II Monitor or the Acorn MOS – what we might call a BIOS today.

The main thing that KERNAL gives a Commodore system (PET, Vic20, C64) is the screen handling – this lets you cursor up to a line, edit the line on-screen and simply hit the return key to (re) enter it into your program.

The MS sources have a simple line entry system with conditional assembly for the many different systems MS sold their BASIC to – some vendors changed it, some were supported directly. I changed it to use the RubyOS standard “getline” code which gives me line editing, history and easy access to the RubyOS star commands.

Character output was similarly changed to point to the RubyOS routines, however there appears to be some issues regarding CR+LF handling that I couldn’t quite get right, so I just edited the code to make it work.

This is MSBASIC level 2, assembled for a Commodore system running on Ruby displaying the MS “Easter Egg”: 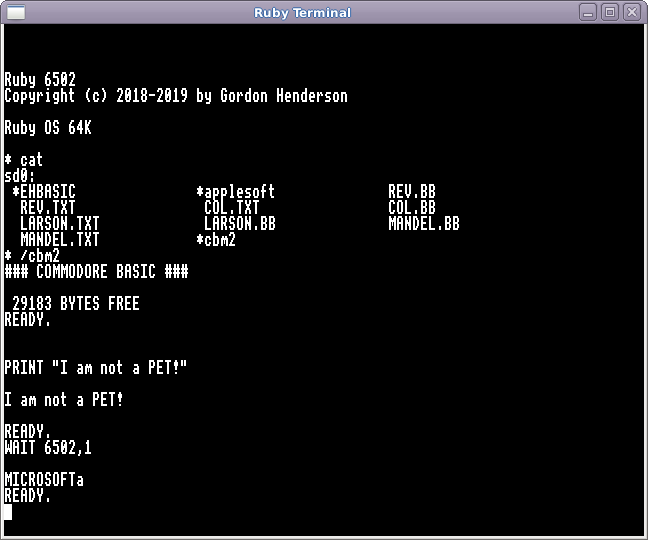 I loaded and ran the same mandelbrot program as before – it took a few seconds longer than EhBASIC – I suspect due to it using a 5-byte floating point format, however it did work well.

Microsoft added a little “Easter egg” into the BASIC 2.0 for Commodore – if you enter

then it would print MICROSOFT! on the screen. This didn’t work initially, then after wondering why it was crashing and after looking at the code I found that it poked the characters directly into screen memory – which is at $8000 in a PET, etc. … This is where I assembled the BASIC to load and run, so I decided to change the easter egg code to simply print it to the screen. A small complication is that it uses “PETSCI” codes which are obscured in the code to make it not obvious that it was there – I ‘fixed’ that for Ruby too. the ‘a’ at the end would be an exclamation mark on a real PET/C64.

The sources for the 6502 version of Microsoft BASIC have been published for a number of years now and it seems that Microsoft aren’t doing anything about it, however that doesn’t mean it’s in the public domain, free to use and sell. Microsoft still holds the copyright to it so while I feel it’s fine for me to use it, adapt it for my own personal use, I’m fairly sure that if I tried to sell it I’d be in a somewhat sticky position, however if anyone else wants to have a look at the sources, then I suggest starting here:

Create your own Version of Microsoft BASIC for 6502

I created a new target for it, but used the CBM2 target as a template for everything to try to keep all the Commodore changes and features. (Such as the Easter egg) The one thing I’ve not looked at is the file handling and while I’m sure I could make it work with the Ruby Filing System, I’m not sure it’s really worth it for now. (And also, perhaps selfishly I am wondering why I want to use such a relatively primitive BASIC compared to BBC Basic)