Since I first wrote about the PiFace back in July there has been a new development! Dr. Andrew Robinson who’s the leader behind the project at Manchester university have had some valuable feedback from their initial prototype release and re-designed the board and it’s now a full production product complete with all the regulatory markings, using surface mount technology with many improvements too!

The biggest change (for me!) is jumpers to enable (or disable) the two on-board relays. Now you can have full control of all 8 outputs without having the relays click when you are using the outputs for purposes other than the relays.

There is a nice terminal block with the Pi’s 5 volt supply exposed on a screw terminal to use for your external projects too. Still the same 4 buttons which shadow 4 of the 8 inputs.

Another nicety is the addition of a rubber bumper which sits on-top of the Pi’s HDMI socket and prevents the board moving with the possibility of shorting anything out.

Finally, rather than the 4 little 3mm LEDs on the original one, there is now a bank of 8 surface mount LEDs on the 8 outputs! So you can see exactly which output is on or off.

Software wise, it’s the same as before – SPI interface to the Pi and my existing wiringPiFace test program worked out of the box without any changes. 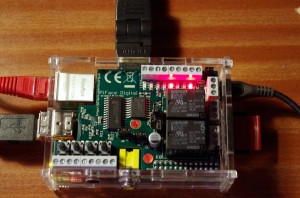 (Ok, So I can’t actually access the terminals in the Adafruit case, but it was easier for this quick test to leave the Pi in that case!)

So all in all, it’s a fantastic update to the original, and if you want more information on it, then go to their website here.

Andrew informs me that it’s going to be a couple of weeks before they’re ready with the full documentation for the board, so hang in there, but keep checking their site for updates!