These pages serve as a demonstration of using the Gertboard with the wiringPi library from the command-line, in C and BASIC. There are several pages in this series and I hope they might act as a tutorial and possibly even an aid to making sure your Gertboard is fully functional.

WiringPi is a set of C functions designed to make it easy for C and C++ programs to access the Raspberry Pi’s  GPIO. There is also a utility program; gpio which you can use from the command-line to test simple GPIO operations.

(The little plastic & metal ones, not the wolly ones!)

There are several jumpers on your Gertboard. You should be familiar with them from reading the manual, but I’ll describe some of them here.

I would suggest leaving these removed for now – however we will use them later on, so keep them safe.

The first thing we’ll do is set the jumpers for output and light up the first LED, after that we’ll move onto more complex examples.

Move the 12 In/Out jumpers to the output position (think out -> away from the Pi, so they go closest to the LEDs), then connect the Gertboard to your Pi and boot the Pi

One thing to note: The inputs to the buffers are high impedance – what this means in practical terms is that if you touch one of the pins on the Pi side, then the LEDs are likely to light up. Sometimes just waving your hand near them is enough. While this isn’t generally a problem, it’s something you should be aware of.

To light our first LED: Connect a jumper wire from the Pi’s connector marked GP17 to the pin marked B1 on the long row:

Login to your Pi and enter these commands:

This should switch the first LED on. (note than GP17 is the internal BCM_GPIO pin number 17 which corresponds to wiringPi pin 0) Then:

should turn it off. If that works, then congratulations!

But if not… Then you first need to make sure it’s all wired up correctly and that the Gertboard is functioning correctly. The photo below is how it should be wired up to start with: 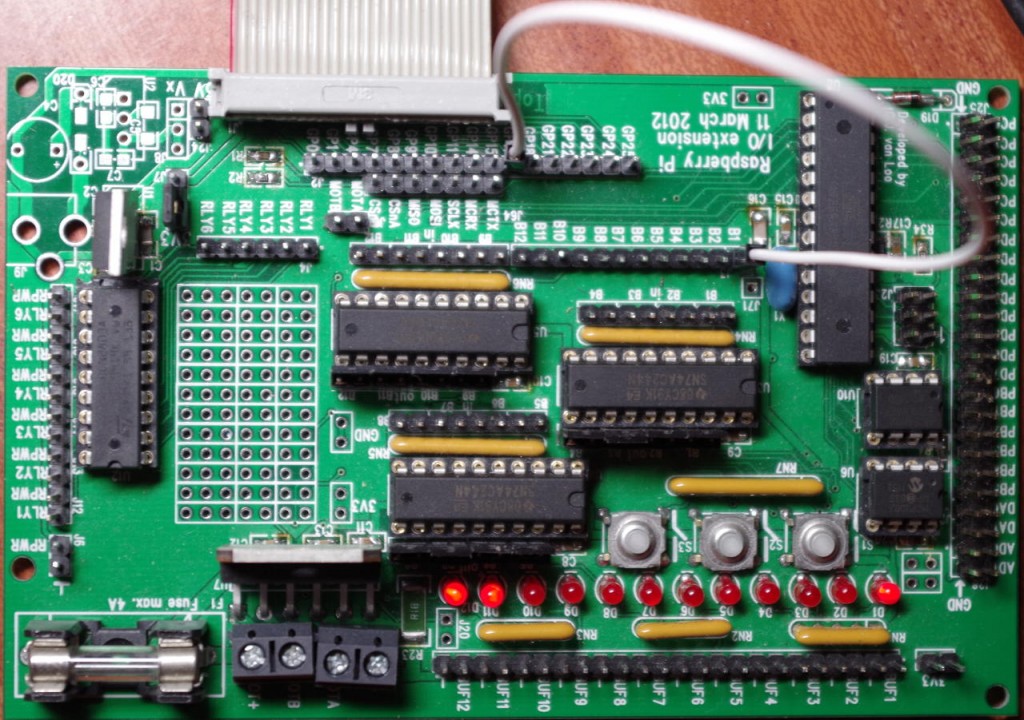 Check that you have it setup as above and try again. (Note that the LED on the right here – the first LED is lit, but also that the 2 LEDs on the left are also lit – this is simply due to the high impedance inputs floating high as mentioned above)

If you do get this far, then we can move onto the next step which is writing some programs using the Gertboard and wiringPi.

All the example programs here are part of the wiringPi software distribution, so if you have installed it correctly you shouldn’t need to do much typing!

Index to pages in this section