So the past two weeks has seen me attending Techcamp 2013 held at at Sparsholt college just outside Winchester. I was the lead tutor for their Raspberry Pi course. And now, a few days later I’ve finally had enough sleep to type this up 😉

Techcamp is run by Tom Ward, an Electrical Engineer who previously worked as Head of Science at Elstree School, Berkshire. Tom believes that young people should have ever opportunity to enjoy a summer camp from a technical perspective as opposed to those other summer camps where you play sports, etc… (Although Laser Tag is an active outdoor sport played here!)

A few months ago Tom was looking for some Raspberry Pi people and I replied to his posting and before I knew it, was in the system… Young people (8 to 17 year old!) attending the camp had to pick 2 courses to do over the week. The camp ran for two weeks and a very small number of young people stayed for both weeks, (attending 4 courses), but the majority were one week only.

Helping me with the Raspberry Pi class was Andrew Mulholland who flew over from N. Ireland for the fortnight.

The young people are split into day and residential “campers” and the residential ones arrive on the Sunday afternoon… So evening activities are arranged, to encourage people to get to know each other.

Sunday evening on the first week: We gave the young people some cardboard, tape and scissors and had them build a bridge that had to take firstly the weight of the lightest camper, and secondly Tom…

Most groups went for the “brick” approach where they just taped as much cardboard together as they could, but one group went for a proper engineering approach with a simple arched brdge which worked very well indeed!

The second week’s first night challenge was to build a tower with spagetti and marshmallows – sadly rain stopped play, but we did get a few structures built:

The rain produced a spectacular double-rainbow though: 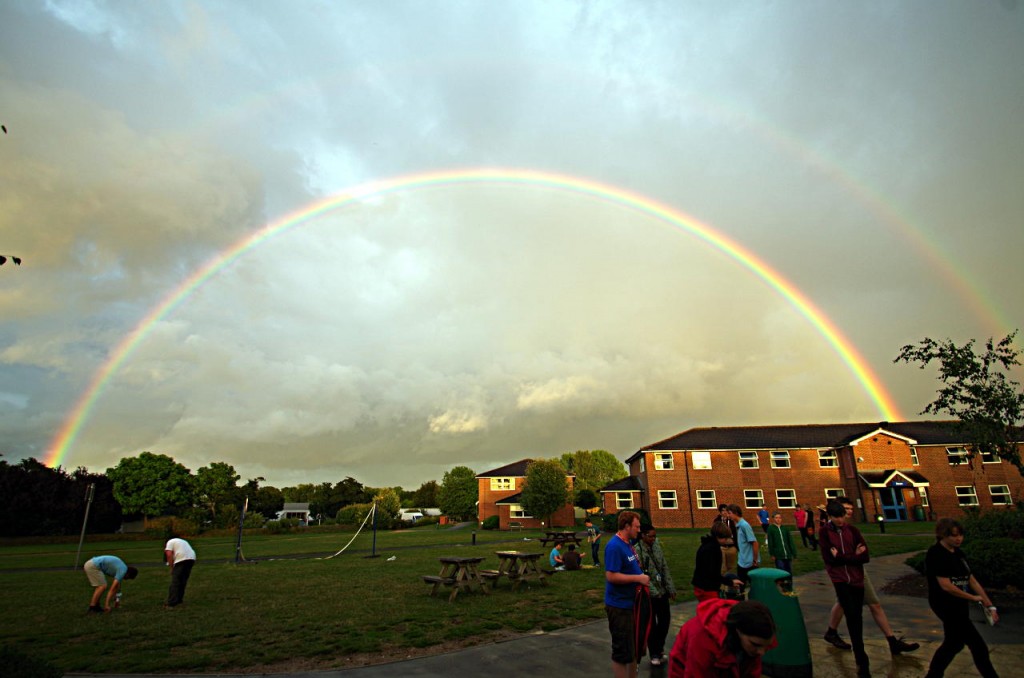 And on to the classes… I had 14 young people in my morning class and 13 in the afternoon on the first week and 2 groups of 12 people the second week. The camp fees included a “lab fee” to cover materials used and the students got to take home their Raspberry Pi, case, keyboard, mouse and SD card.

One of the challenges was to make the classrooms computer friendly – and the one we had been allocated had a grand total of one Ethernet point, but plenty of Wi-Fi. We had no Wi-Fi adapters for the Pi’s so some creativity was required involving re-arranging the desks, 3 Ethernet switches (actually, one was a 20 year old 10mB hub!) a lot of gaffer tape and an area I dubbed “the valley of death”.

I also wanted to create lots of space so that myself and Andrew could easilly move round the students to give them help and assistance and so on. I think it worked out well given the situation, and the whiteboard and smart-boards at the front were visible.

The smartboard was driven directly by a Raspberry Pi, but without drivers, there was no on-screen keyboard, but the touch/mouse input worked very well for Scratch but less-so when we had to type stuff in.

This was the first year Techcamp ran the Pi course – not a surprise given how relatively new the Pi still is, so it was hard to gauge what to do – the course was billed as an introduction to the Raspberry Pi and some game playing and programming – e.g. Minecraft… So we started by giving a general introduction to the Pi, some command-line activities – the first “Hello world” using BASH, then moved onto some simple programming with Scratch – Hello kitty, and turtle graphics. We moved onto BASIC with more turtle graphics then got the students to start to modify some of the programs I’d written to give them experience with looking at other code – my little snake game went down well with the students hacking it to change colours and alter the colission mechanisms (ie. to cheat snake death!)

After that we moved on to Python and took a more traditional approach (next year I’ll do more turtle graphics in Python) and then we looked at GPIO. We started with a simple LED+Resistor circuit on a breadboard when we wrote a program in BASIC, then Python to blink out S.O.S in morse code, then we used my ladder board whith more LEDs and buttons.

Finally it was minecraft time (for those who wanted to play it – some wanted to keep on with the ladder board and more code to use it) – with the caveat that they could only play the Pi version of Minecraft if they wrote some Python to interface to the Minecraft server. We had some intersting bits of code there – random dirt blocks in the sky – “competitive” teleporting of characters, auto-laying of TNT as you move and so on.

The camp was run over 2 weeks, but over the weekend between the two main weeks, we had a dozen students who werestaying both weeks to look after… So we hired a minibus and took them to various local attractions. InTech science center was a big hit and the Portsmouth Royal Navy Museum was another.

But apart from that, a good day was had by all: 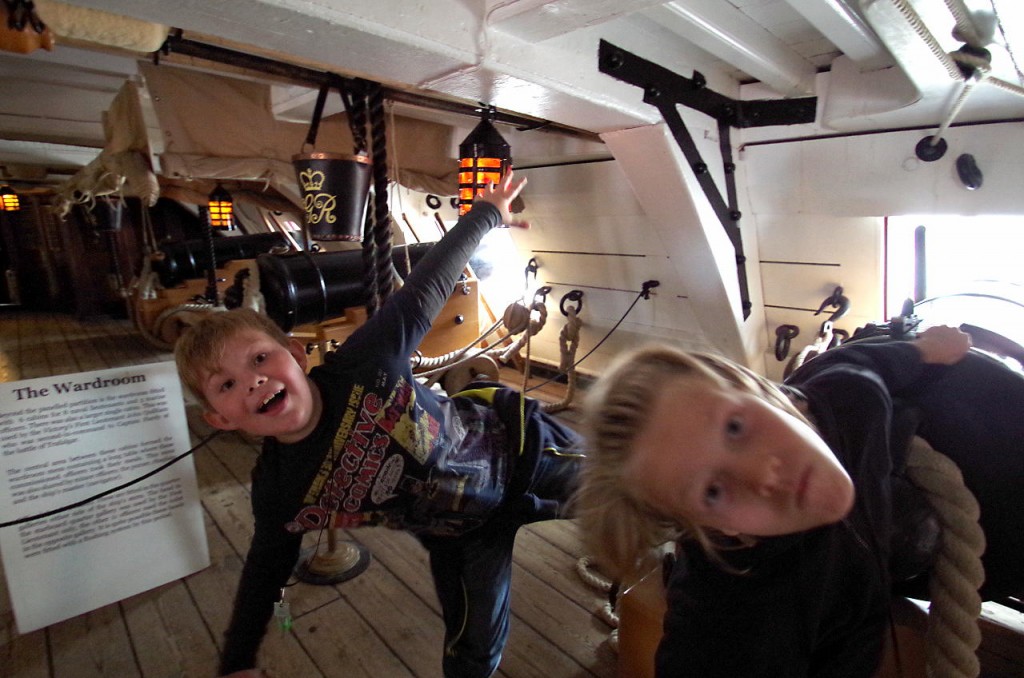 Techcamp was about young people and technology – and it would be unfair of me to leave out the other courses that were run over the fortnight – Model rocketry, Robotics, building a pair of  Laser Tag guns (Parents – expect your child to get burnt by a soldering iron!) games and web design, not to mention the lighter evening activities forthe residential campers (“Reverse engineering” was particularly well enjoyed!) and the staff entertainement night for the young people – Felix and his amazing non-newtonian liquid kitchen chemistry, Jack and his gravity defying physics and myself with my make a Raspberry Pi(e) from scratch demo…

It was a pretty amazing 2 weeks for me. Very enjoyable and I’m already planning for next year!