Friday saw me on a train to Manchester to attend the 2012 UCubed Unconference and what a great time it was too.

I went just because I could! But I also had my Raspberry Pi to demo as well as showing my BASIC interpreter running on it along with all the other stuff that comes with it – The Debian install and LXDE desktop. It generated a lot of interest indeed! 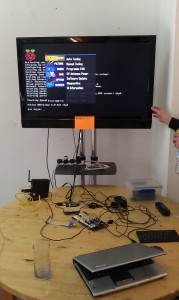 It generated so much interest, that I barely had time to see and talk to more people! However I did attend the talk given by Alan O’Donohoe and on my way to the station, Alan put me on the spot for a quick audio-boo on IRC!

Some of Alans photos of the day can be found here

Another chap who caught my eye was Julian Skidmore of the Fignition project. Pretty amazing stuff – he has an Atmel 8-bit chip (same as Arduino chip), displaying video entirely in software and it runs a variant of FIG Forth.

The venue for the event was Manchesters MadLab a pretty fantastic place!

Thanks to Alan, Les and the others for organising it. It certainly made a nice change from sleepy Devon!